Report says Israel arrested 1,900 Palestinians since beginning of this year 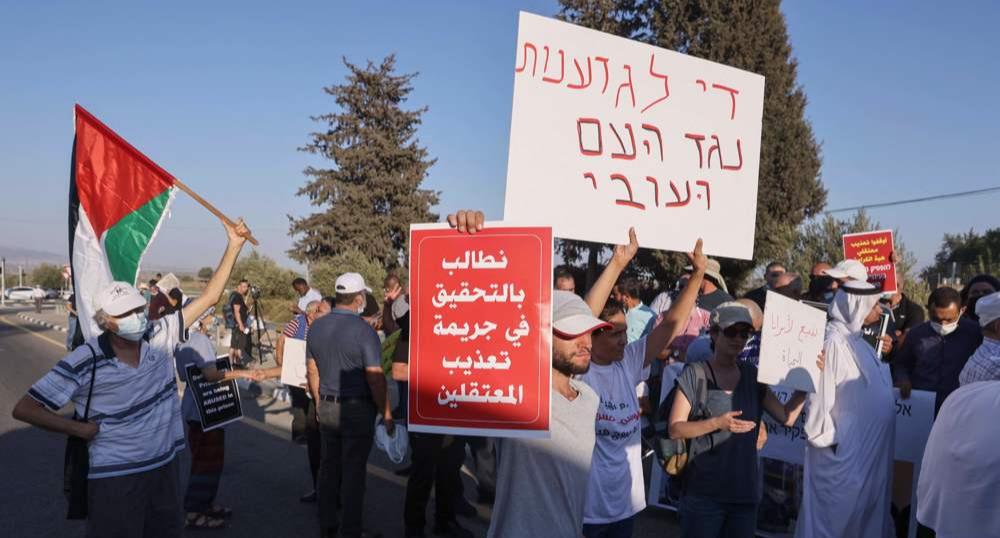 Arab Israelis lift Palestinian flags and placards during a protest outside the Megiddo prison in northern Israel, on August 22, 2021, to demand the release of Palestinian prisoners. (Photo by AFP)

Ramallah, August 30 (RHC)-- The Israeli regime has arrested at least 1,900 Palestinians, including a large number of minors, across the occupied al-Quds since the beginning of the year, a local media report says.

Media quoting Palestinian rights groups reported on Sunday that most of the arrests were made following an the Operation al-Quds Sword in the besieged the Gaza Strip in May.  The Palestinian Prisoners Club said that the Israeli regime had detained mainly youths to instill fear among them and prevent them from confronting its forces.

"The arrests targeted widely children under the age of 18, with the aim of discouraging them from confronting the occupying regime and its forces."

Recently, the Israeli courts have issued notices and sentences against minors accused of throwing stones during protest rallies at Israeli forces across the occupied territories.

Tel Aviv has reportedly sentenced more than 50 residents from al-Quds to more than 25 years in jail while others are facing much heavier sentences.  That figures is apart from thousands, including hundreds of children and women languishing in different Israeli jails for years. Many of them are being held without charge or under Israel’s so-called administrative detention policy.

In May alone, the Israeli authorities cut off and terminated the health insurance of several prisoners and their families in al-Quds.  The  Palestinian Commission of Detainees and Ex-Detainees Affairs last month reviewed Israeli prison authorities’ deliberate medical negligence toward Palestinian detainees as well as violating the very basic rights of the inmates languishing behind bars in the Israeli jail.

The Israeli jail authorities keep Palestinian prisoners under deplorable conditions lacking proper hygienic standards in Israeli jails.   Palestinian inmates have also been subjected to systematic torture, harassment and repression all through the years of Israel’s occupation of the Palestinian territories.

Human rights organizations say Israel continues to violate all rights and freedoms granted to prisoners by the fourth Geneva Convention and international laws.  There are reportedly more than 7,000 Palestinians held at Israeli jails. Hundreds of the inmates have been apparently incarcerated under the practice of administrative detention.

Senior Palestinian officials say Israel must be held accountable for its persecution of Palestinian people, including its mass and arbitrary detentions.   Some prisoners have been held in "administrative detention" for up to 11 years.

Tel Aviv launched a brutal bombing campaign against the besieged Gaza Strip on May 10, following Palestinian retaliation against violent raids on worshipers at al-Aqsa Mosque and the regime’s plans to force Palestinian families out of their homes at the Sheikh Jarrah neighborhood of East al-Quds.

According to Gaza’s Health Ministry, 260 Palestinians were killed in the Israeli offensive, including 66 children and 40 women. At least 1,948 others were also wounded.

In response, Palestinian resistance movements, chief among them Hamas, launched Operation al-Quds Sword and fired more than 4,000 rockets and missiles into the occupied territories, killing 12 Israelis.

Apparently caught off guard by the unprecedented barrage of rockets from Gaza, Israel announced a unilateral ceasefire on May 21, which Palestinian resistance movements accepted with Egyptian mediation.