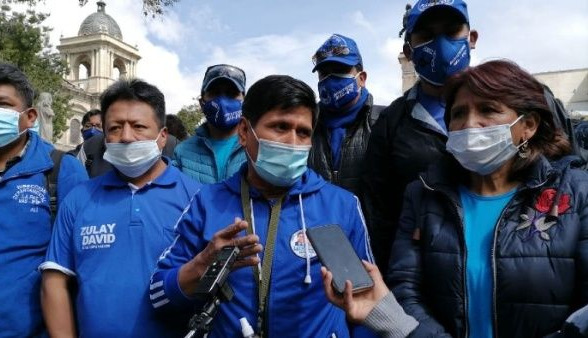 The departmental secretary of MAS in La Paz, Eddy Loza, announced the 36 names of those involved that they will present to the Public Prosecutor's Office. | Photo: erbol

La Paz, September 19 (RHC)-- The Movement Towards Socialism (MAS) reports that it will send to the Bolivian Public Ministry a list of 36 names of people involved in the coup perpetrated against former president Evo Morales in November 2019.

The departmental secretary of MAS in La Paz, Eddy Loza, revealed that among those enlisted is the former president of the de facto government, Jeanine Áñez, among other political actors, former authorities, former presidents and opposition leaders, according to local media.

Likewise, the former ministers of Government, Arturo Murillo, and of Defense, Fernando López, and the former president of the Medical Association of La Paz, Luis Larrea, who made a sedition and continues to speak about health, make up the list of names.

According to Loza, almost all of those denounced are free, but members of his movement request their arrest, "we have a list of 36 people, of which the Public Prosecutor's Office will surely review (...). All the coup perpetrators are, brothers", he said.  "The Public Prosecutor's Office must do its job and comply with the people's claim", he added.

The list of coup accomplices is signed by the five regional leaders of MAS; of the Council of Women's Peasant Federations of the Yungas of El Alto and La Paz, and by district leaders.

As a result of the uprising, 38 people died in November 2019 and thousands of others were persecuted, detained or tortured, as the departmental secretary of the ruling party noted.

Loza lamented the loss of many brothers of struggle for the coup throughout the country. "We cannot forget those criminal acts. The history of that bloody uprising cannot go unpunished".