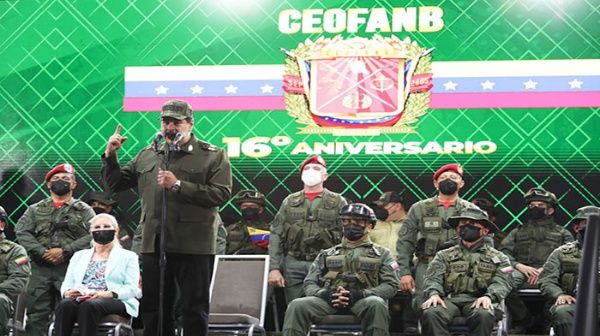 The Venezuelan president thanked the commitment of civilian and military actors who have defended the sovereignty of Venezuela. | Photo: @PresidencialVen

"The Colombian oligarchy is infiltrating in our country terrorist groups, armed drug traffickers, which are known as Tancol," denounced the head of state.   Explaining the details of these armed groups, President Maduro said that they are neither guerrillas, nor pseudo-guerrillas, nor paramilitaries.   "The Tancol have infiltrated little by little into Venezuelan territory (...).   I call on the entire Venezuelan military forces, the military chiefs, to declare war on the Tancol, to go after them and get them out of the country, capture them and put them on trial."

"I ask for the support of the popular power of Venezuelan families to identify these armed terrorist groups, drug traffickers from Colombia, wherever they are, so that our military forces go and remove them like a tumor, remove them from the national territory," urged the president.

Nicolas Maduro thanked the commitment of civilian and military actors who have defended Venezuela's sovereignty in the midst of foreign invasion attempts and illegal economic, financial and commercial sanctions.