Bolivia reiterates that there was no fraud in 2019 elections 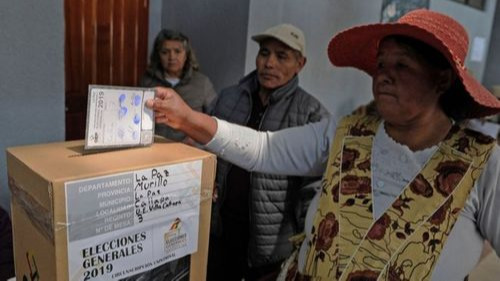 In the analysis carried out by the Bolivian Attorney General's Office only 15 minutes were found with errors, among the more than 34,000 reviewed.

Washington, October 23 (RHC)-- During an international forum called "What happened in Bolivia's 2019 elections and the OAS report?  Experts share their findings," Bolivian Attorney General Wilfredo Chávez reiterated that there was no fraud in those presidential elections.

In the event held in Washington, Chavez highlighted that the Organization of American States (OAS) made its report based on 226 electoral reports.  "only 0.6 percent of the total of 34,555 reports.  The OAS did not comply with its first work."

The official explained that fraud was ruled out after a process carried out with international accompaniment, called "Minute by Minute: Democracy and Truth," in which the 34,555 minutes were reviewed and analyzed during five days in El Alto, department of La Paz.

He emphasized that in the analysis only 15 minutes were found with erroneous political votes and other slight errors, which were corrected by the Supreme Electoral Tribunal (TSE).

"Ladies and gentlemen, there was no fraud in my country," reiterated the attorney general during the forum, which was attended by expert speakers from the Center for Economic and Policy Research (CEPR), Jake Johnston; from the Council on Foreign Relations, Francisco Rodríguez; and from the Massachusetts Institute of Technology (MIT), Jack Williams.

The latter panelist argued, using samples including studies of one thousand simulations, that the then presidential candidate, Evo Morales, won the elections with at least a 10 percent margin.

After the results of the 2019 elections, which gave the former president Evo Morales as the winner, opposition sectors promoted actions to declare an alleged fraud that was supported by an OAS report, which has been questioned by several international institutions and organizations.