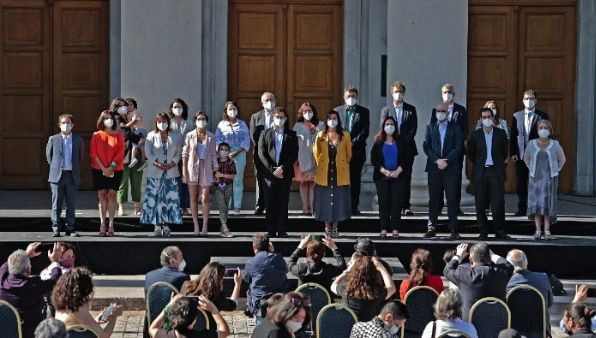 The Government team will be integrated by 14 women and 10 men with diversity of regions, parties, economic and regional origins and sexual diversities. | Photo: @RGaleani

Santiago de Chile, January 21 (RHC)-- The president-elect of Chile, Gabriel Boric, presented his Cabinet of Government that will accompany him when he assumes power on March 11th.  The announcement was made this Friday at the Museum of Natural History, located in the Quinta Normal Park in the Chilean capital.

Among the 24 ministers of the new government, the internist Izkia Siches, who will assume the portfolio of Interior and Public Security, former president of the Chilean Medical Association and former campaign chief of the president-elect, stands out.  Siches is an independent militant who will be the first woman in Chilean history to occupy such an important position in the Government, whose gender parity reaches 14 women in the Cabinet compared to 10 men.

In this regard, Gabriel Boric stated: "We are not innovating, because someone tried it before," in clear reference to Michelle Bachelet's administration, which achieved gender parity with an equal number of men and women in her Cabinet.

Other female members of this governmental group are the biologist and veterinary doctor Maya Fernández, who will be Minister of National Defense, and Camila Vallejo, Secretary General of Government and former partner of Boric during the Chilean student struggles.

Likewise, the civil engineer and former student leader, Giorgio Jackson, will be in charge of the General Secretariat of the Presidency (Segpres), together with other ministers who will head the administration of the newly elected President of Chile.

In his presentation speech, Boric highlighted the importance of remembering that his government comes from a historical trajectory and that is why he decided to present the ministers at the Natural History Museum.  "We are part of a long history and we are united, intertwined with a history that precedes us," he said.

"I ask you to assume your tasks with the greatest commitment and responsibility," Boric told the members of his Cabinet and called on them to make Chile "a friendlier place to live."

Among the main lines of his government will be to face the pandemic, recover the economy and guarantee the care of the environment, a portfolio that will be led by scientist María Eloisa Rojas.  To stop the pandemic, he assured that he would continue with the successful vaccination strategy deployed by the previous Administration and that for his mandate, people's health would be at the top of his priorities, with special attention also to mental health.

He also pointed out that they would attend to the education sector and would coordinate with all instances to take the necessary measures for schools to reopen.  "We assume with affection and energy the challenge of recovering the economy without reproducing its structural inequalities. Sustainable growth with fair redistribution of wealth", he commented, in relation to another of the lines of his mandate.

"We are going to make all the changes we have proposed step by step, because we are convinced that Chileans demand structural changes".

At the same time, he urged to take care of the constituent process. He specified that the Executive would seek to grant "all possible facilities to the work of the Constitutional Convention", especially to safeguard its autonomy, since he assumed his commitment as an ally of that body.

"We need a constitution that, unlike the current one, will be the home of all those who live in our country and not of winners and losers," he said.

The elected head of state highlighted the diversity of the members of the Cabinet with regional and generational differences, with the presence of independent parties, among other characteristics. "We need you to dialogue, to listen a lot", he indicated to the ministers and urged them to work as a team.

"Know that I highly value your courage, but above all your willingness to work for the common good, to work for Chile above any personal consideration," he said while thanking those who responded to his call to form the government.

"A good president is not the one who is above his ministers breathing down their necks, but the one who allows them to shine and deploy all their talent, together with their teams to advance in the collective project we have subscribed. Empower yourselves, ministers!", he said.

The future Government team has an average age of 49 years, but with a dispersion of ages, since the longest-lived is the head of Housing and Urbanism, Carlos Montes, at 75 years old, while there are many people between 30 and 40 years old.