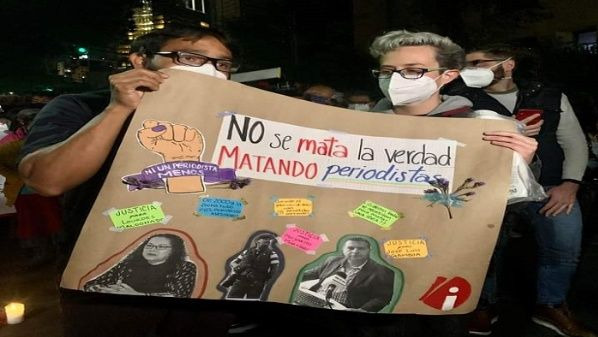 "We will comply with the commitment to conduct a thorough investigation.  This investigation has already begun and we will inform you periodically, as long as it does not affect the progress of knowledge about the possible causes, motives, those responsible, the intellectual and material authors, all of this, but we are already working on the case," said the Mexican leader.

AMLO stressed that there is no impunity on this fact.  "But at the same time, let's not make politics in such a serious matter," he remarked when asked by a journalist when he related the former governor Jaime Bonilla with the figure of the murdered journalist.

Likewise, the president reiterated that there will be no summary trials and we must be confident that no one is being protected.  "We see with rage and indignation that crimes against journalists in the country continue in impunity.  To kill a journalist in Mexico, is like killing no one."

Lourdes Maldonado attended the morning press conference at the National Palace on March 26, 2019, and exposed a border issue.  Likewise, local media recognize that the journalist warned of threats against her related to a labor conflict, whose counterpart was Jaime Bonilla, then federal delegate and later governor.

The first reporter murdered with López Obrador as president was Norma Sarabia, on June 11, 2019 in Tabasco; and the second was María Elena Ferral, on March 30, 2020, in Veracruz.

The communication platform Desinformémonos, in an article about the murder of Lourdes Maldonado and other communication professionals, stated that organized reporters pointed out that in a feminicidal country like Mexico, where 11 women are murdered every day, the murder of a woman journalist should also challenge and mortify us on a social level, as it touches the most sensitive fibers of a place where the social fabric has been broken.

The area of Journalist Networks and Freedom of Expression of the association Comunicación e Información de la Mujer (CIMAC) documented that every 38 hours, a woman journalist or communicator is subjected to some type of violence because of her job to disseminate the news.

On the other hand, the Network of Women Human Rights Defenders in Mexico condemned the murder of Lourdes Maldonado.  The Network demanded that state governor Marina del Pilar Ávila Olmeda implement effective measures to guarantee the protection of communicators and journalists.