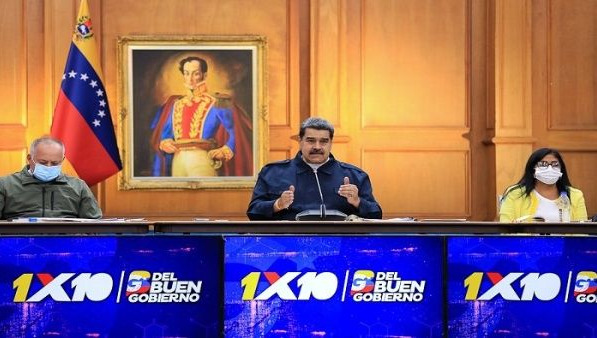 The President of Venezuela highlighted the importance of the development of the strategic lines of the new era and stressed the need to join the platforms for good governance. | Photo: @PresidencialVen

Caracas, May 24 (RHC)-- Venezuelan President Nicolás Maduro denounced this Monday another attack against the national energy system -- this time against the Guri Hydroelectric Complex, a site that has suffered two sabotages in the state of Bolívar.

The president detailed that the attacks target the nation's refineries and energy producers, after an attack against the El Palito refinery in Puerto Cabello, Carabobo state, and another against the Cardón refinery in Punto Fijo, Falcón state, took place over the weekend.

President Maduro emphasized that behind the attacks are the Venezuelan right wing and the Colombian President, Iván Duque, as has happened previously.  "They are being objects the refineries of hidden enemies to harm our refining objects, behind that is the wild right and the plans of Iván Duque, who is crazy, hurt, hate against Venezuela", pointed out the head of state....

Regarding these situations, President Maduro informed that the Minister for Petroleum of the Latin American nation, Tareck El Aissami is working in the facilities of the El Cardón refinery where, according to the data offered by the head of the portfolio, the fire had been extinguished and operations could continue.

The Venezuelan president highlighted the importance of developing the strategic lines of the new era and stressed the need to join the platforms of the good government system.

In this sense, the Venezuelan leader called to register in the 1x10 platform, which he catalogued as "the tomb of bureaucracy" since, according to his words, complaints can be made directly and they will be solved in the shortest possible time without the need of paperwork or other mechanisms.

Along with this 1x10 platform, he also mentioned the Ven App, the Venezuelan social network where, in addition to being used to contact people from all over the country, it also works to report problems and concerns.

"Out of 325 cases we have been able to resolve approximately 50 percent. Only 2 of the complaints have turned out to be false", said the Venezuelan dignitary while ratifying the good functioning of the initiatives and his call to join them.

According to the president, this, together with other aspects mentioned in depth last Friday, forms part of the six strategic lines of action of the Bolivarian Revolution for the new era.