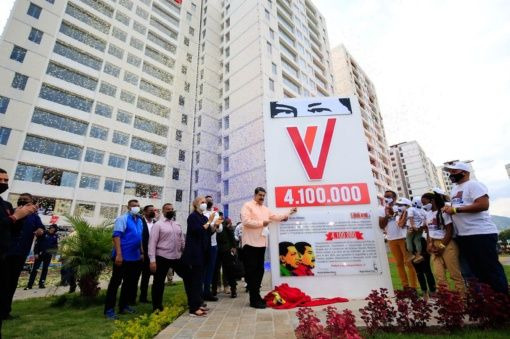 The Bolivarian head of state approved the allocation of resources to continue promoting the construction of houses for the Movement of Tenants and Settlers. | Photo: @PresidencialVen

Caracas, June 24 (RHC)-- Venezuelan President Nicolás Maduro delivered this Thursday in the Ezequiel Zamora housing development of Ciudad Tiuna, in Caracas, the 4,100,000th home as part of the Gran Misión Vivienda Venezuela (GMVV), which he described as a milestone in the nation.

The president said: "Here we are, precisely in the 4,100,000th house.  You have to see the work effort in good times and bad," while he assured that each home delivered to the families complies with the Constitution of the Bolivarian Republic and will offer security to the children of the new generations of Venezuelans.

"With the block of conscience, the cement of love and the slate of the revolutionary soul, to build Communal Councils, Communes, communities and maintain beautiful public spaces, in addition to consulting the popular self-government for all issues of interest," said the Bolivarian head of state.

He also pointed out that those benefited with their new homes in different communities all along the national territory, must lead in parallel and with conscience a new way of life in community.  He urged the GMVV to become an expression of socialism, of the citizen, of the whole family, with the exercise of love, understanding and being at the forefront in the construction of communities in which participative democracy prevails.

The delivery ceremony was attended by the First Combatant Cilia Flores, part of the ministerial cabinet, and the beneficiaries of the one, two, three and four million houses.

On the other hand, the leader of the Bolivarian Republic approved the allocation of 6,858.36 petros to continue the execution of houses by the Movement of Settlers throughout the country, through the first step, consisting in the acquisition of construction materials.

In this sense, he detailed that such approval of resources corresponds to "the word made with the Movement of Tenants and Settlers in the assembly held last Tuesday," where proposals and proposals were raised and the housing situation throughout the country was analyzed.