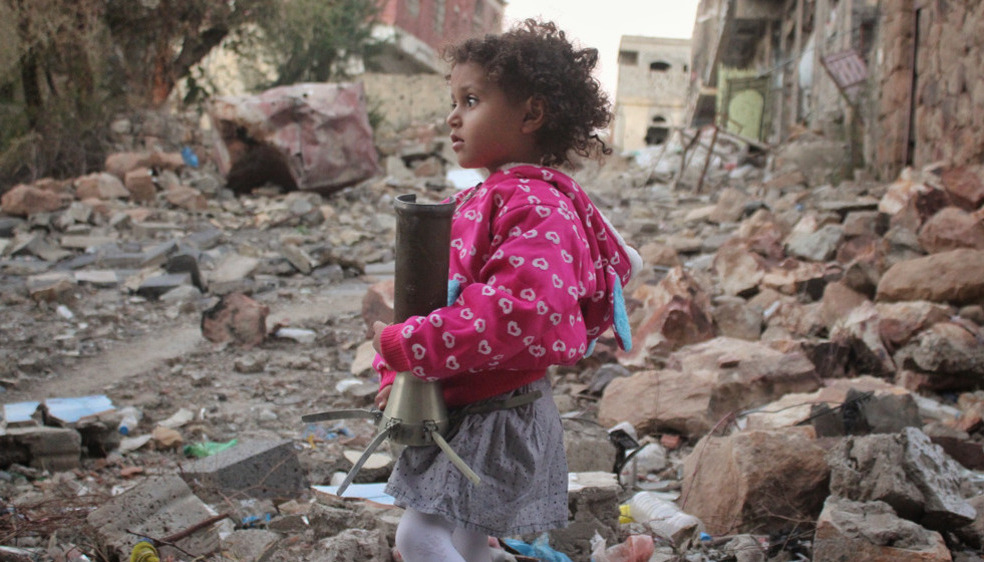 The file photo shows a Yemeni girl holding shrapnel in the Yemeni city of Ta'iz in March 2021.

United Nations, July 31 (RHC)-- The United Nations Committee Against Torture has voiced concern over the torture and ill-treatment of Yemenis by the United Arab Emirates (UAE) armed forces, state security agencies, and on-state armed groups, calling for a "viable pathway” through which victims can seek justice.

The committee made the remarks during its concluding session on Friday, as it highlighted the UAE’s involvement in the ongoing Saudi-led war on Yemen.

It also assigned special responsibility to investigators and prosecutors that work with crimes of torture and abuse, calling for a viable pathway for victims to seek justice, redress and rehabilitation.  In addition to the UAE, the UN committee also released findings on Botswana, Nicaragua, and Palestine, officially known as the Concluding Observation, as it concluded its current session on Friday.

It will hold its next session from October 31 to November 25 to review Australia, Chad, El Salvador, Malawi, Somalia and Uganda.   The latest development comes as human rights advocates have documented numerous abuses by UAE-backed security forces in southern Yemen, including enforced disappearances, arbitrary detentions, and inhumane detention conditions during the COVID-19 pandemic.

In a September 2020 report, the UN Group of Eminent Experts on Yemen found that the UAE was continuing its air operations and support for local Yemeni forces on the ground in southern Yemen, despite apparently withdrawing most of its ground troops in mid-2019.

Also in June, the rapes of six minor girls in Yemen’s western coastal province of Hudaydah provoked outrage in the country after it was learned that Takfiri terrorists, supported by the UAE, had perpetrated the horrendous crime.

The Entesaf Organization for the Protection of Women’s and Children’s Rights vehemently condemned the rapes in the strongest terms, stating that all forms of sexual violence are rejected by the international humanitarian law and that all states are obliged to prosecute the perpetrators.

The organization also denounced the continued international silence on the crimes, blaming the inaction of the United Nations and all its bodies for the perpetration of these heinous acts and their negative repercussions on the Yemeni society.

Saudi Arabia launched a devastating war on Yemen in March 2015 in collaboration with its Arab allies and with arms and logistics support from the US and other Western states.

The objective was to reinstall the Riyadh-friendly regime of Abd Rabbuh Mansur Hadi and crush the Ansarullah resistance movement, which has been running state affairs in the absence of a functional government in Yemen.

While the Saudi-led coalition has failed to meet its objectives, the war has killed hundreds of thousands of Yemenis and spawned the world’s worst humanitarian crisis.