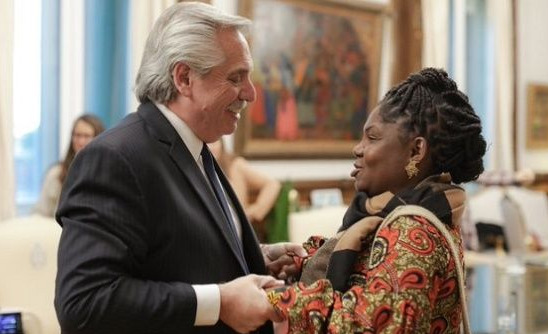 Buenos Aires, August 5 (RHC)-- Argentina's President Alberto Fernandez left on Friday for Bogota to attend the inauguration of Gustavo Petro as President of Colombia on Sunday.

Besides meeting with Petro, the Argentinean leader and his Foreign Minister Santiago Cafiero will hold bilateral meetings with Bolivian President Luis Alberto Arce and Honduran President Xiomara Castro, who will also attend the inauguration.

After Petro's victory in the second round in June, Fernandez celebrated his victory "because Colombia and Latin America need him."  "And because I hope that little by little Latin America will head towards that place, where we can be united and build the Homeland that we need," the Argentinean leader said.

Last week, Francia Marquez, the first Afro woman to reach the Colombian Vice Presidency, visited Argentina as part of a tour of various Latin American countries.  There she met with Alberto Fernandez as well as with Vice President Cristina Fernandez-Kirchner.