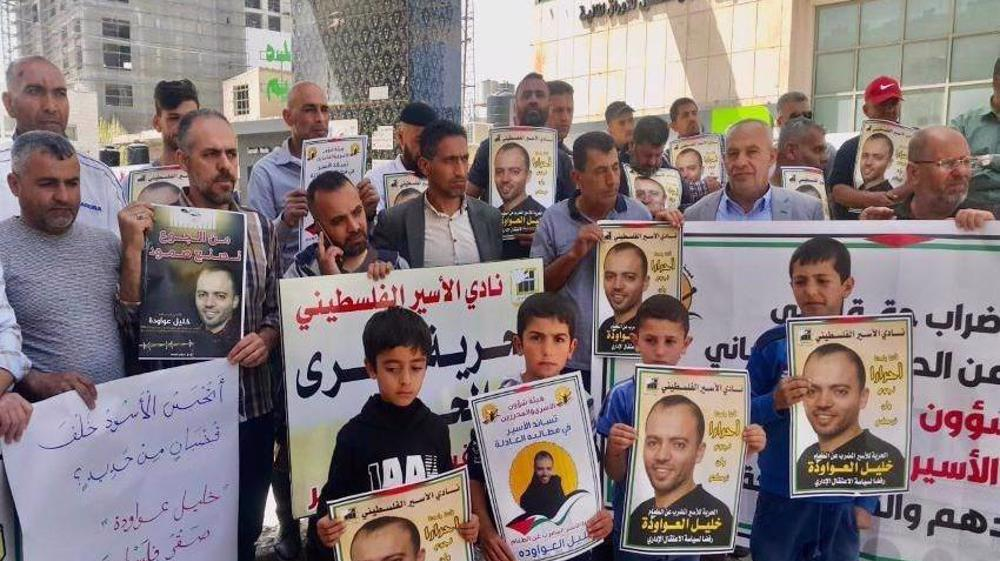 Ramallah, August 22 (RHC)-- The wife of Palestinian prisoner Khalil Awawdeh, who is on a months-long hunger strike, says Israeli forces have prevented her from entering the occupied territories through a checkpoint in the occupied West Bank to visit her critically ill husband.

Dalal Awawdeh told Palestine’s official Wafa news agency on Sunday that she was denied entry into the occupied territories  via Tarqumia checkpoint, located south of the West Bank, saying the regime forces claimed that her entry permit had expired the previous night.

She noted that her husband’s health condition has reached a critical stage as a result of his prolonged hunger strike in protest at his indefinite, unfair and unexplained imprisonment at the hands of the Tel Aviv regime, adding he has lost half of his weight and his ability to speak.

However, she said, her husband’s morale remains high, stressing that he will press ahead with his hunger strike until he is granted a full release.

Awawdeh, a father of four, is one of several Palestinian prisoners who have gone on prolonged hunger strikes over the years to protest so-called administrative detention, which allows Israel to hold prisoners without charge practically indefinitely.

The 40-year-old Palestinian inmate, from the West Bank city of al-Khalil (Hebron), was arrested on December 27, 2021. He went on hunger strike for 111 days before suspending it following promises that his administrative detention would not be renewed. After the promises turned out to be false, he resumed the strike, demanding his freedom. Israel issued an order to renew his administrative detention for a period of four months from June 26 to October 25 despite his highly critical health condition.

On Friday, an Israeli military court urgently suspended the administrative detention of the hunger-striking Palestinian.  His lawyers say Awawdeh’s “hunger strike will not be suspended because he is asking for his release and not for a freeze of his detention.”

Lawyers for hunger-striking Palestinian prisoner Khalil Awawdeh say he will press ahead with his 168-day fast until he is granted a full release even after the Israeli regime was forced to temporarily freeze his detention.

Thousands of Palestinians are held in Israeli jails. Human rights organizations say Israel violates all the rights and freedoms granted to prisoners by the Geneva Convention. They say administrative detention violates the right to due process since the evidence is withheld from prisoners while they are held for lengthy periods without being charged, tried, or convicted.

Palestinian detainees have continuously resorted to open-ended hunger strikes in an attempt to express outrage at the detentions.