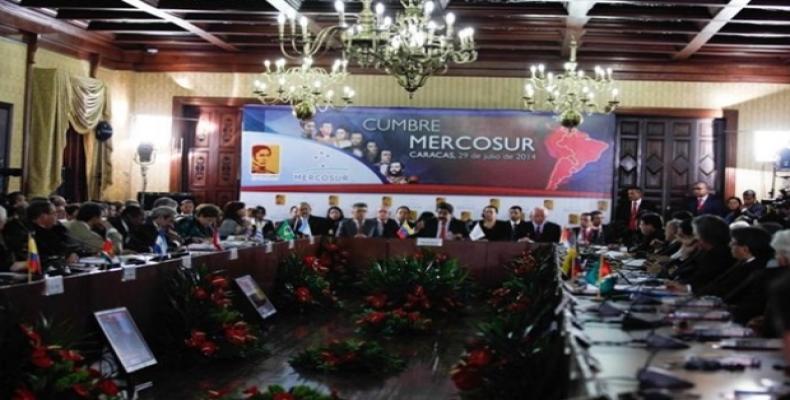 Caracas, July 30 (PL-RHC), -- The presidents of the South Common Market (Mercosur) member nations Tuesday paid tribute to Simón Bolívar, as part of the activities for the bloc summit that is being held in Caracas.

The establishment of a complementary economic zone and the threat of the vulture funds in Argentina are among the topics for discussion at the 66th Mercosur Presidential Meeting.

The pro tempore presidency of the bloc will be given to Argentina during this meeting, after a period of work for the social and economic integration.

Created in March 1991, the bloc, formed by Brazil, Uruguay, Paraguay, Argentina and Venezuela, has Bolivia, Chile, Colombia, Ecuador and Peru as associated nations, and New Zealand and Mexico in the role of observers.

The heads of Government were also welcomed at Caracas' Bolívar Square by the Military Band of Caracas, the University Choral Group, and the Simón Bolívar Youth Symphony Orchestra, under the direction of Christian Vasquez.