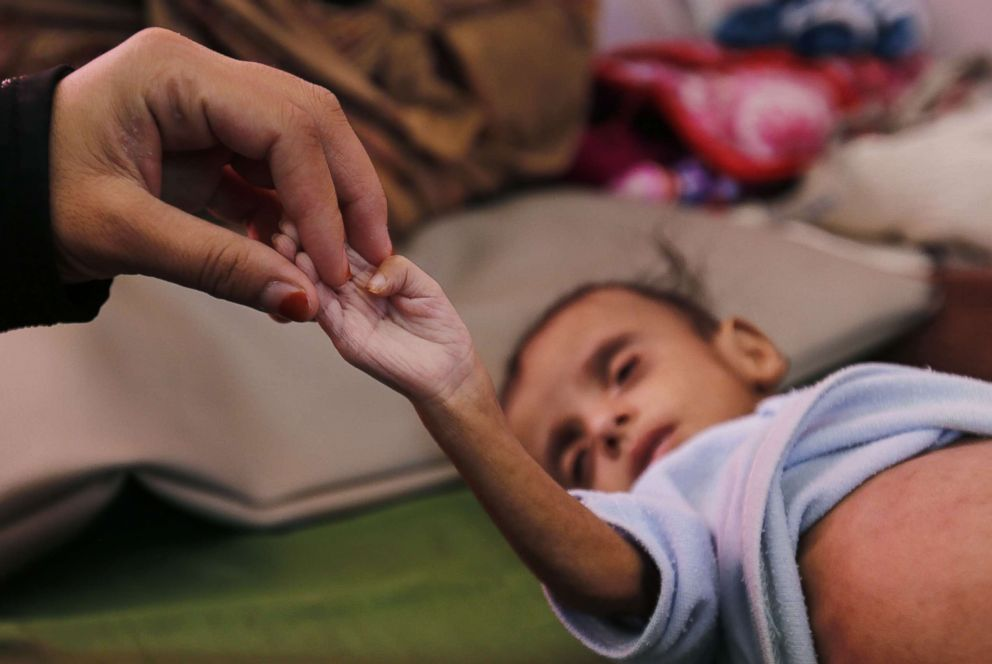 Sanaa, November 19 (RHC)-- An official with Yemen’s Health Ministry says more than 80 newborn babies lose their lives on a daily basis because the war-torn country does not have the required medical equipment due to the Saudi-led war and blockade.  Najeeb Al-Qubati, the undersecretary of Yemen's Ministry of Public Health and Population for the Population Sector, made the remarks on Thursday while addressing a local event.

Some 39 percent of babies are premature, which shows a significant increase compared to the period before the start of the war, he said.  The official said the use of prohibited weapons was one of the reasons behind the growing trend. He said several human rights organizations have already acknowledged and condemned Saudis for using such arms.

Yemeni medical centers are in need of some 2,000 incubators, he said, noting that 632 incubators have been provided so far.  Since launching the war with the support of Washington in March 2015, the Saudi-led coalition has used internationally-banned weapons, including US-made cluster bombs, to target residential areas, according to the Cluster Munition Monitor.

Apart from the war, Saudi Arabia has imposed a blockade on Yemen which, combined, have claimed the lives of hundreds of thousands of people. The military aggression has destroyed much of the country’s infrastructure, including the health sector.

Earlier this week, the Yemeni Health Ministry said mosquito-borne diseases such as Malaria and dengue have been on the rise since the start of the war.  Speaking at a press conference in Hodeida, Muhammad Al-Mansour, the undersecretary of Yemen's Ministry of Public Health and Population for the Primary Care Sector, said war and blockade were two main reasons behind the increase of epidemics and diseases in the country.

Failure to implement to malaria control program led to a rise in cases from 513,000 in 2015 to 1,100,000 in 2019, he said, noting the rate was higher in areas where citizens were displaced such as in Hodeida.  Malaria and dengue fever claimed the lives of more than 260,000 Yemenis between 2015 and 2019, he said, naming the closure of ports which has led to delays in the arrival of equipment and medicine as one of the leading factors.

In September, Yemen's al-Masirah television network reported the Ministry of Public Health and Population had confirmed the Saudi-led blockade had raised acute malnutrition cases to more than 632,000 children under the age of five and 1.5 million pregnant and lactating women.  "The siege and intense bombardment with prohibited weapons caused a high rate of congenital abnormalities and miscarriages, with an average of 350,000 miscarriages and 12,000 malformations," it said.  According to the ministry, the siege led to an eight-percent increase in premature births compared to the situation before the war.

The blockade has also increased the number of cancer patients by 50 percent. The figure showed 46,204 cases registered during the year 2021.  The ministry said the Saudi-led war had destroyed 162 health facilities completely or 375 partially and put them out of work.

Yemen’s Ministry of Health has voiced deep concern over the dire consequences of the Saudi blockade of the war-torn country for the nation’s health sector and people.  The objective of the war was to reinstall the Riyadh-friendly regime of Abd Rabbuh Mansur Hadi and crush the popular Ansarullah resistance movement, which has been running state affairs in the absence of a functional government in Yemen.  Not only has the Saudi-led coalition failed to meet its objectives, it has also killed hundreds of thousands of Yemenis and created what the UN calls the world’s “worst humanitarian crisis.”