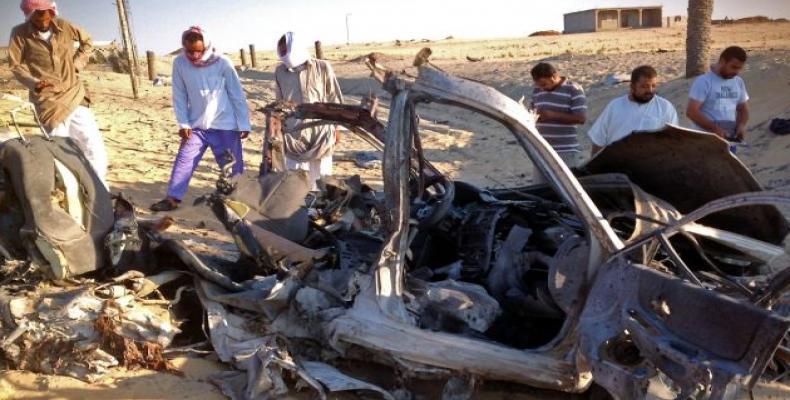 Cairo, October 25 (RHC)-- More than two dozen Egyptian policemen have lost their lives and scores of others wounded in a powerful explosion at a military checkpoint in the Sinai Peninsula of the North African country.

Security sources, speaking on condition of anonymity, said on Friday that a bomber "rammed a vehicle packed with explosives" into a checkpoint in the area of Karm al-Qawadees near the town of Sheikh Zuweid, close to the border with the Gaza Strip, and about 334 kilometers (214 miles) northeast of the capital, Cairo.

The sources said at least 31 police were killed and nearly 30 soldiers were wounded in the attack. They warned the death toll may rise further as many of those wounded are in a critical condition.

On October 19th, seven Egyptian troops were killed and six others critically injured when a roadside bomb targeted their vehicle as it was traveling in the south of el-Arish city, north of the Sinai Peninsula, heading to a natural gas station in search of suspected local militants.

The Sinai Peninsula has long been considered as a safe haven for gunmen who use the region as a base for their acts of terror. Since the ouster of Mohamed Morsi, Egypt’s former president, on July 3rd last year, gunmen have launched almost daily attacks in Sinai, killing members of security forces.

Ansar Bait al-Maqdis, an al-Qaeda-affiliated militant group, has claimed responsibility for most of the terrorist attacks in the region.