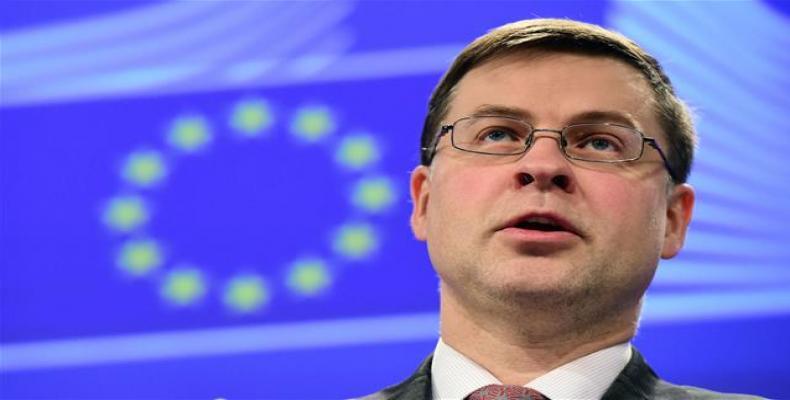 Brussels, May 28 (RHC)-- European and U.S. officials have called on Greece to reach a fast deal with its bailout creditors required for the release of the financial aid that Athens desperately needs. Valdis Dombrovskis, the European Commission vice president for the Euro and Social Dialogue, at a press conference Wednesday highlighted the need to strike a deal over the Greek debt "as quickly as possible."

Also on Wednesday, U.S. Treasury Secretary Jacob Lew called for the rapid resolution of the Greek crisis during an address at the London School of Economics. Elsewhere in his talk, the U.S. official warned about the risks a Greek default and its possible exit from the eurozone could pose to the global economy. Lew further said Greece and its creditors must "double down" their efforts to reach a compromise.

The EU and U.S. authorities' remarks come as Greek Prime Minister Alexis Tsipras has said his country is close to a loan deal to save its struggling economy. Speaking ahead of Greek negotiators meeting with representatives of the bailout creditors in Brussels, the premier said that the two sides are "in the final stretch," and "close to an agreement."

Tsipras said more details regarding a possible agreement would soon be released. Earlier, a source from the Greek government had said Athens and its creditors' technical experts would begin drafting the deal in Brussels on Wednesday.

A deal would pave the way for the unlocking of 7.2 billion euros (USD 7.8 billion) of bailout loan money to Greece which had received two bailout packages in 2010 and 2012 worth a total of $240 billion (USD 272 billion) from its international lenders following its 2009 economic crisis.