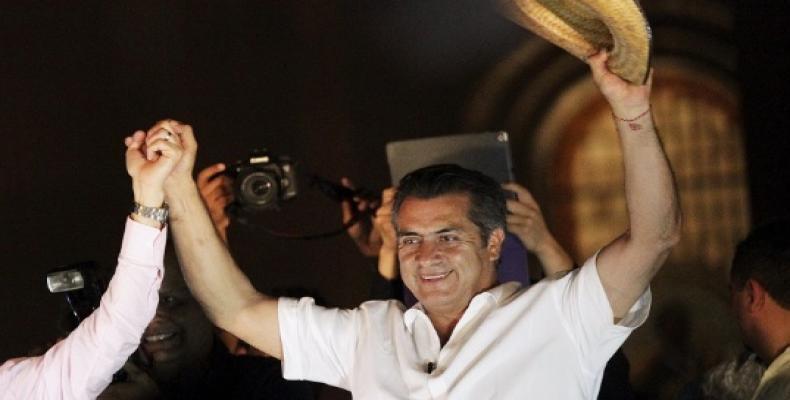 Mexico City, June 8 (teleSUR-RHC)-- Independent candidate of the northern Mexican state of Nuevo Leon, Jaime Rodriguez, made history on Sunday by breaking with the two-party system after winning the governorship with at least 44 percent of the vote, according to preliminary results and exit polls.

"All the exit polls are giving us the lead, which is now irreversible,” Rodriguez said in an apparent victory that capitalized on voters tired of the traditional parties and taking advantage of the new electoral legislation which allowed for independent candidacies for the first time.

According to an exit poll by influential Mexican newspaper Reforma, about 47 percent of the voters had cast their ballot in favor of Rodriguez while only 27 percent had voted for PRI candidate Ivonne Alvarez.

Rodriguez, who was a ruling centrist PRI party militant before becoming independent about two years ago, proclaimed his victory at the main square in Monterrey in front of hundreds of supporters who hailed his achievement.

Known by his nickname El Bronco, Rodriguez said that he now has four months to form a government, which he guaranteed will not resort “to any witch-hunt.” He warned that surely there will be people in jail if they “robbed money from the state.”

He also said his “victory is an example of the awakening of the Mexican people in what is the beginning of the second Mexican revolution which will change the attitude of many.” He later held a news conference and told reporters his government would work “toward conciliation and consensus to generate positive results.”