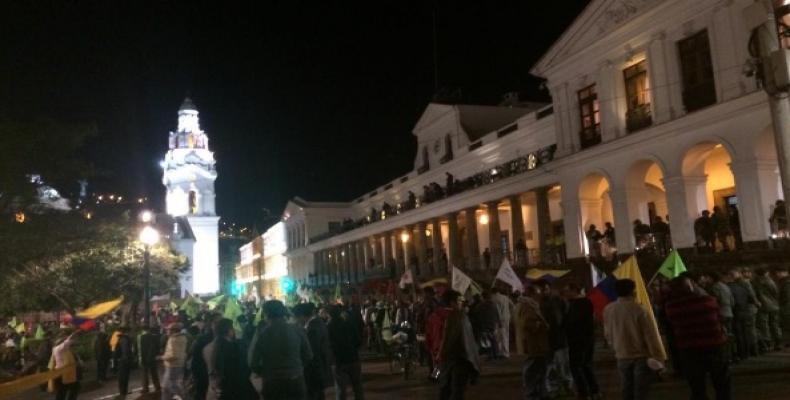 Quito, June 26 (teleSUR-RHC)-- Ecuadorean President Rafael Correa thanked supporters for their continued solidarity amid ongoing right-wing demonstrations against his government. On his Twitter account, Correa expressed his satisfaction with the thousands who came out in support of the Alianza PAIS Party and the Citizen Revolution.

Opposition forces to in Ecuador held more protests in the cities of Quito and Guayaquil on Thursday. Correa singled out opposition politician Jaime Nebot, who has been calling the protests against the government, as a clear example of the progress the country has made with respect to the collection of taxes.

Correa temporarily withdrew the inheritance bill following the opposition protests, calling for a peaceful national debate. However he claims the opposition groups want to oust him from power rather than debate the bills they claim to be protesting.
TeleSUR reporters witnessed many upper class protesters at the demonstration. Some waved black flags and others draped the national flag around their shoulders. They held placards labeling the democratically elected and popular president a “dictator.” Others held placards demanding freedom to protest, despite no laws barring them from protesting.