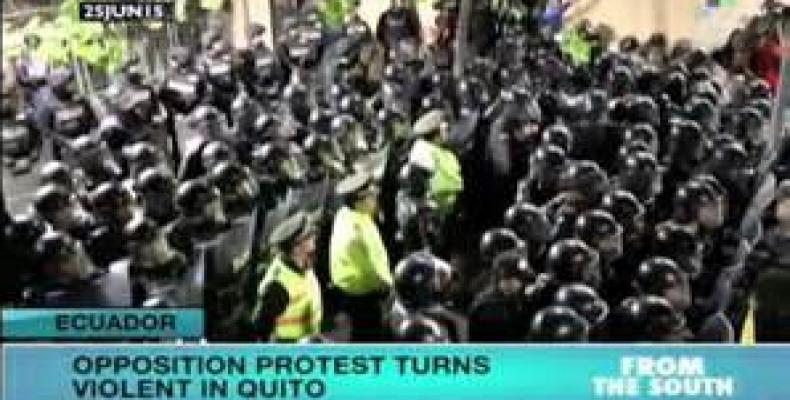 “Both masked and unmasked demonstrators violently attacked the police,” reported teleSUR correspondent Lucho Granados. “The violence was completely unprovoked by police, who were guarding a street, keeping the opposition march from reaching the government rally (located in Independence Square).”

The pro-government counter-protest in Independence Square, where the presidential palace is located, took place “in a festive atmosphere,” according to teleSUR correspondent Estefania Bravo.

"We have to learn from the mistakes from the past," said Labor Minister Carlos Marx Carrasco, who rejects the violence against Ecuador’s democratically elected president.

About two blocks away from the peaceful pro-Correa gathering, opposition protesters attempted to break through the police cordon, with demonstrators affiliated with the Confederation of Indigenous Nationalities of Ecuador, threw rocks at police officers, reported El Telegrafo.

The CONAIE has aligned itself with the right-wing opposition and called for an indigenous “uprising” against the Correa government, calling him to repeal land and water laws.

Earlier in the afternoon, in the region of Cotopaxi nearby the capital, the opposition protests resulted in more violence, leaving 20 police officers and one civilian injured, according to authorities.

“We went to Chasqui in Cotopaxi because they brutally attacked our police officers, don’t ask us not to feel outraged,” tweeted Minister of the Interior Jose Serrano.