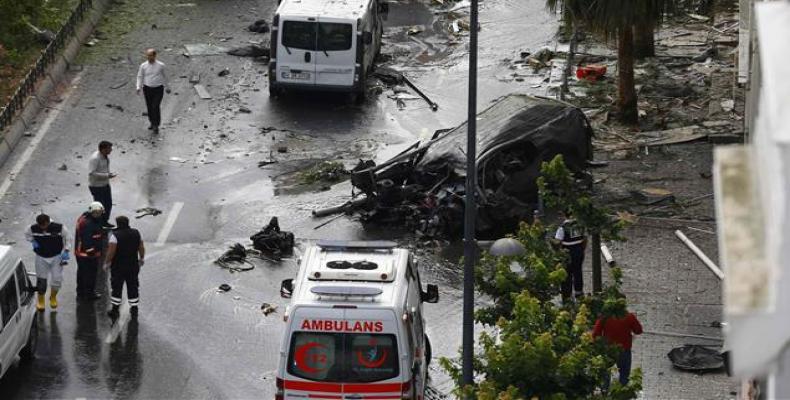 Istanbul, June 7 (RHC)-- A bomb blast has rocked central downtown Istanbul, Turkey, killing at least 11 people and leaving 36 others injured.  According to authorities, a parked car packed with explosives was detonated by remote control as a police bus drove by on Tuesday.

The blast occurred during the morning rush hour in the densely populated district.  Gunshots were heard in the area after the blast, according to state-run Anadolu Agency.  The area is a commercial hub as well as the location of Istanbul University and is close to key tourist sites like the Grand Bazaar.

There was no immediate claim of responsibility but Kurdish militants and Daesh terrorists have all staged attacks in Turkey recently.  Turkey has suffered a spate of bombings this year, including two attacks in tourist areas of Istanbul blamed on Daesh and two car bombings in the capital, Ankara, which were claimed by a Kurdish militant group.

The attacks have come as Turkey is battling PKK militants, who have killed hundreds of members of the security forces in the southeast.  Bombings in Turkey's heartland have had a dire effect on the tourism industry and further violence in Istanbul comes at the worst possible time heading into the key summer season.

Turkey, a member of NATO and the US-led coalition, has stepped up its operations in northern Syria.  The country is worried by the advances of Kurdish forces who are supported by the United States.