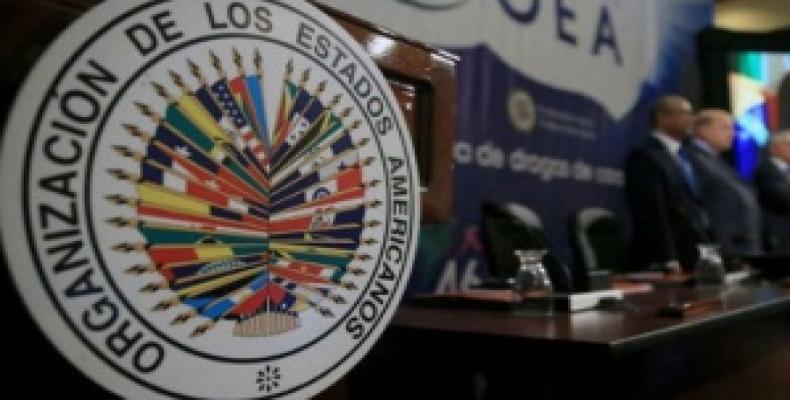 Washington, June 21 (RHC)-- The Organization of American States convened a special session with Venezuela on Tuesday before it decides whether to suspend the country from the OAS using the Democratic Charter.

The meeting included a session with the UNASUR-mediated dialogue team led by former presidents of Spain, Jose Luis Rodriguez Zapatero; the Dominican Republic, Leonel Fernandez; and Panama, Martin Torrijos.  The three former heads of state have been overseeing talks between the Venezuelan government and opposition.

Venezuela’s delegation to the OAS requested the session, which comes two days before the body votes on application of the so-called 'Democratic Charter' against the country, which OAS secretary-general Luis Almagro has been pushing.

Almagro called the meeting "a step that hopefully can add value to the meeting on the 23rd in which presidents can provide new information about the progress they have made."

The OAS General Assembly, which convened June 13th and 14th in Santo Domingo, voted to hold the session to promote dialogue.  Venezuelan President Nicolas Maduro has supported the talks with opposition, but representatives of the right-wing coalition failed to show up for the scheduled meeting.

The Permanent Council of the OAS unanimously adopted a resolution on June 1st opposing suspension and encouraging dialogue, and the body repudiated the opposition for not attending the talks to address the economic situation and political deadlock in Venezuela.

Facing a review of his actions as secretary-general, Almagro changed his tune on Venezuela on Monday, saying that he does not want to see the country suspended from the regional bloc.