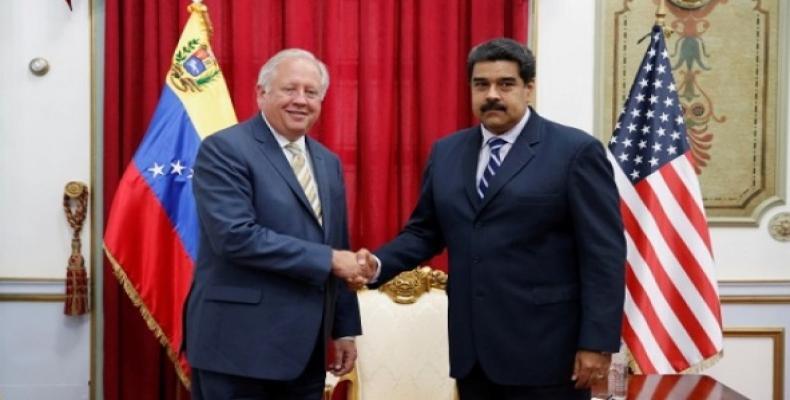 Caracas, June 23 (RHC)-- Venezuelan President Nicolas Maduro has met with a U.S. envoy in Caracas amid tension between the two countries.  On Wednesday, Maduro met veteran diplomat Tom Shannon in the Miraflores presidential palace in Caracas.

The Venezuelan president held a two-hour meeting with Thomas Shannon, a high-ranking official in the U.S. Department of State, where the pair discussed developing more respectful relations between their two countries.

The high-level meeting was the fruit of a meeting last week between Venezuelan Foreign Minister Delcy Rodriguez and U.S. Secretary of State John Kerry.

"I have confirmed our interest that, sooner rather than later, we can build an agenda of respect between the U.S. and Venezuela,” Maduro told a crowd of supporters shortly after his meeting with Shannon.

Tensions between the two countries have heightened, with Venezuelan political authorities accusing the U.S. government of trying to undermine the democratically elected government.

"It's never too late … I hope President Obama will rectify the position he has held the last eight years against the revolution," added Maduro.

Shannon has reportedly also met with opposition figures on his short visit to Caracas.