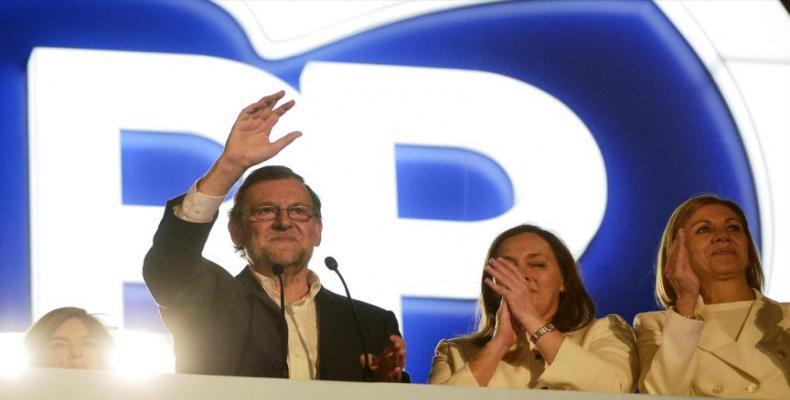 Madrid, June 27 (RHC)-- Spain's acting Prime Minister Mariano Rajoy claims he has the right to form the government after his ruling conservative party won the most seats in general elections.  Rajoy's People's Party won 137 seats in the 350-member parliament in Sunday's elections, the second in six months, but fell short of a majority.

Spain's other main party, the Socialist PSOE, is in second place with 85 seats.  The left-wing Unidos Podemos ("Together We Can"), a coalition led by anti-austerity party Podemos, came third with 71 seats while the center-right Ciudadanos finished fourth by winning 32 seats.

Despite having the highest number of seats, the PP still needs the support of other parties to establish a coalition or minority government.  No single party won enough votes to form a majority government in elections in December last year and the political parties that won seats in the parliament failed to form a coalition.

Following a six-month power struggle, the parties have vowed to quickly reach a coalition this time, but the results hint at a similar stalemate as the Socialists have said they would not back a government led by Podemos or the PP.

Spain's newspaper El Pais, which is traditionally close to the Socialists, urged the party in an editorial on Monday to allow the PP to govern.  The newspaper wrote: "To facilitate the formation of a government, the Socialists should listen to the mandate of voters that it remain in the opposition and allow the party that has the necessary votes to govern to do so.

The vote came only two days after the surprise results of a referendum in Britain, where people voted to leave the European Union.  The Brexit vote has added to the uncertainty of Spain's political landscape following the elections as well.

Spain's left-wing groups argued that the PP, under Rajoy, had been discredited because of austerity and the chronic unemployment that has plagued Spain since the 2008 financial crisis.