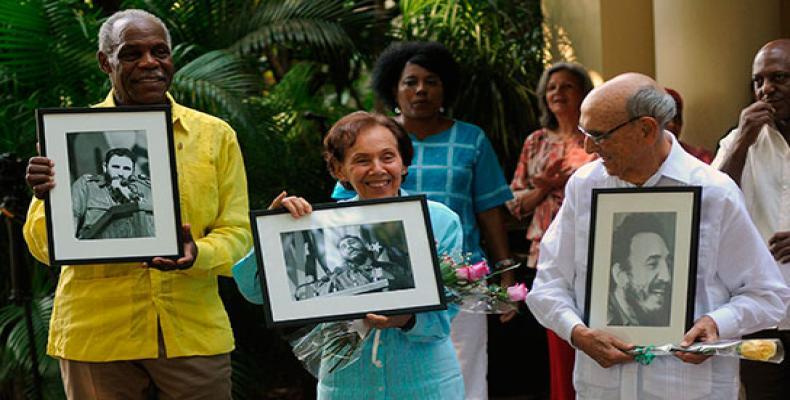 Havana, December 30 (RHC-PL)-- The Cuban State Council granted the National Medal of Friendship to documentary filmmakers Estela and Ernesto Bravo and U.S. actor Danny Glover for their solidarity with the Cuban government and people.

In an activity held Thursday morning at the headquarters of the Cuban Institute of Friendship with Peoples of the World (ICAP), Cuban anti-terrorist fighter and member of the Cuban Five, Gerardo Hernandez said that it was an honor to experience such a moment.

The friends of Cuba received the medal from Jose Ramon Balaguer, member of the Secretariat of the Cuban Communist Party, and director of International Relations of the Party.

Speaking to the gathering, Ernesto Bravo said he felt moved, since he and Estela have strong links with Cuba.   Estela Bravo said that she felt privileged to know Fidel Castro, and that the main reason for her work is for other people to see and live all the things she had the pleasure to live.

American actor Danny Glover referred to the struggle for the return of the Cuban anti-terrorist fighters, whom he recognized for their dedication to the Cuban government and people.  He also stressed the role of the new generations in the future of the Cuban revolutionary project.

At the event were different political and cultural personalities such as Abel Prieto, Minister of Culture; Miguel Barnet, President of the Union of Writers and Artists of Cuba; and Josefina Vidal, Director General for the United States at the Foreign Ministry.