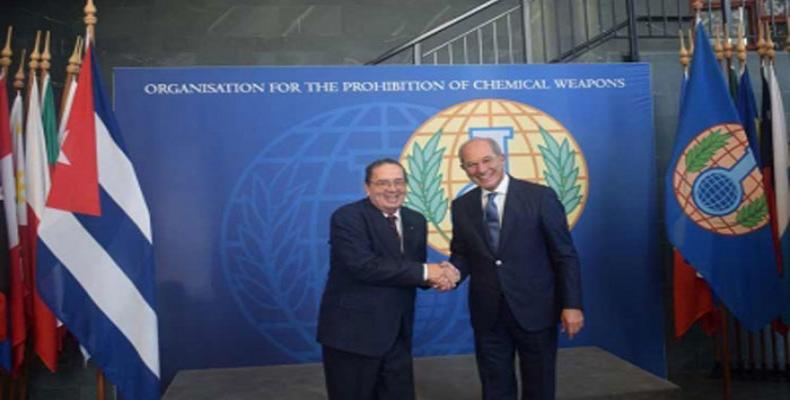 The Hague, October 16 (RHC)-- The Director General of the Organization for the Prohibition of Chemical Weapons, the OPCW, Ahmet Uzumcu, has welcomed the First Deputy Minister of Science, Technology and Environment of Cuba, CITMA, Fernando González Bermúdez, who is visiting The Hague.

Uzumcu hosted González Bermúdez at the headquarters of the organization, and both parties discussed various issues such as the current work of the Organization for the Prohibition of Chemical Weapons in the international context.

The director of the OPCW highlighted the work of Cuba in complying with the Convention for the Prohibition of Chemical Weapons and the cooperation offered on various topics such as dealing with emergencies caused by chemical agents.

For his part, the Cuban deputy minister of Science, Technology and the Environment expressed his country's commitment to the Convention and expressed the need to promote international cooperation as a key element for the prevention of a possible resurgence of chemical weapons.

He also called for a holistic approach to the issue of chemicals and take into account that it is not only about weapons, but also deals with the peaceful use of the chemical industry in terms of development and environmental protection.

In this sense, the Cuban initiative to use the former facilities of an old thermonuclear plant project in the province of Cienfuegos for the production of energy -- to store hazardous wastes, including chemicals -- was used as an example.