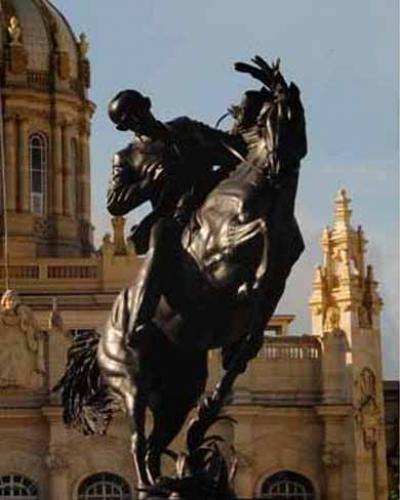 The equestrian statue depicts Marti moments before his death in a cavalry charge in 1895, during Cuba's war of independence from Spanish colonial rule.

The nearly 19-foot tall statue came from the United States two weeks ago. The original, sculpted by U.S. artist Anna Hyatt, has stood for decades at the south en­trance to New York City's Central Park.

The replica of the statue in the U.S. of Cuba's national hero finally made its way to Havana after the Bronx Museum of the Arts gathered donations to make a copy of the sculpture as a gift for Havana.

The goal was "to strengthen the bridge between our two countries," the museum has said. Jose Marti lived in New York for more than a decade, as he prepared the restart of Cuba's independence efforts.

"By unveiling this monument that comes from over there ... we say this is the only path forward, there is no other," said Eusebio Leal, Havana City's historian, alluding to hopes for a future marked by improved U.S.-Cuba ties.

He noted that the statue had been strategically placed. It faces the Florida Straits, with the U.S. coast just 90 miles in the distance.

The statue will be officially inaugurated on January 28, marking the 165th anniversary of Marti's birth.