Cuba Renews Its Solidarity with Venezuela at ALBA-TCP Political Council 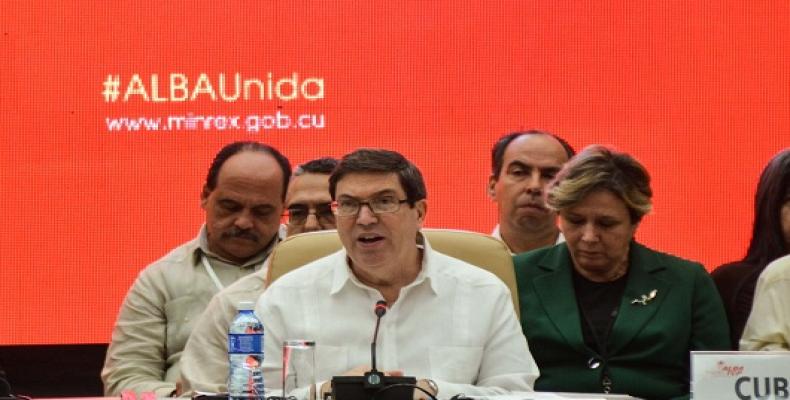 Addressing the 16th Meeting of the Political Council of the Bolivarian Alliance for the Peoples of Our America- Peoples' Trade Treaty (ALBA-TCP), Rodríguez stressed: “We will support Venezuela in any circumstance.”

The top Cuban diplomat welcomed the recent victory of the ruling United Socialist Party of Venezuela (PSVU) in the recent municipal elections.  He further underscored the commitment of ALBA member states to guaranteeing regional peace and stability.

Thursday's 16th meeting of the ALBA Political Council explored new opportunities for regional integration and discussed also the current political context, characterized by constant aggressions on progressive governments and forces in the region.

The meeting sought to coordinate actions and reaffirm the countries' commitment to unity, cooperation and solidarity. Other issues discussed included climate change, preparation for and response to natural disasters, and revitalizing the Community of Latin American and Caribbean States (CELAC) as a regional mechanism for integration and political consultation.

Created on December 14, 2004 in Havana, the ALBA-TCP is an expression of integration based on complementarity, solidarity and cooperation, precepts promoted by two great men: Fidel Castro and Hugo Chavez. ALBA emerged as an alternative to the Free Trade Area of the Americas, proposed by the United States.

Initially made up by Cuba and Venezuela, over the years, other countries have joined the integration mechanism. These include Antigua and Barbuda, Bolivia, Dominica, Ecuador, Nicaragua, Saint Lucia, Saint Vincent and the Grenadines, Saint Kitts and Nevis and Grenada.