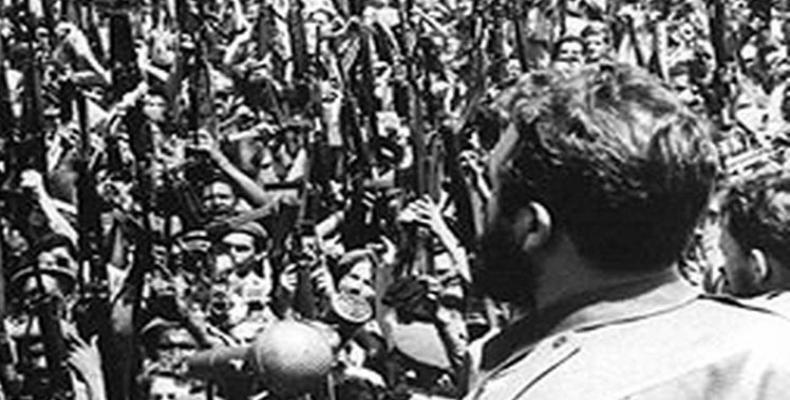 Havana, April 16 (RHC)-- 57 years ago this Monday, the socialist character of the Cuban Revolution was proclaimed by Fidel Castro.

This defining moment in the island's history took place when thousands of people converged on the corner of 23rd and 12th streets in Havana's Vedado neighborhood, a few meters away from Colon cemetery.

The huge crowd were accompanying the remains of the victims of the bombing perpetrated by the United States against Ciudad Libertad and San Antonio de los Baños airfields in Havana.

The bombings, that also targeted the airport of Santiago de Cuba, left seven people dead and more than 50 wounded. It was the prelude of the Bay of Pigs invasion.

The attack hoped to destroy the small Cuban air force on the ground.

During the funeral to the fallen in defense of the country, Fidel Castro proclaimed before the world that the young revolution was socialist.

On that occasion the leader said: "This is what they cannot forgive: the fact that we are here right under their very noses. And that we have carried out a socialist revolution right under the nose of the United States!

Raising their guns, workers and people in general approved the words of their leader, and ratified their willingness to defend the social process started in 1959 until their last drop of blood.

Fidel denounced the imminent invasion of the island, organized by the government of the United States.

In that sense he warned: “Yesterday’s attack was a prelude to a mercenary aggression. Yesterday’s attack, which cost seven heroic lives, aimed to destroy our planes on the ground. But it failed. They only destroyed two planes while most of the enemy planes were damaged or shot down."

As he predicted, at dawn on April 17, 1961 some 1,500 Cuban counterrevolutionaries attacked Cuba at the Bay of Pigs in south-central Cuba.  They were trained, equipped and financed by the U.S. government.

After 72 hours of intense combat, the last invaders finally surrendered on April 19.  This was, as Fidel Castro put it: “The first military defeat of imperialism in the Americas.”