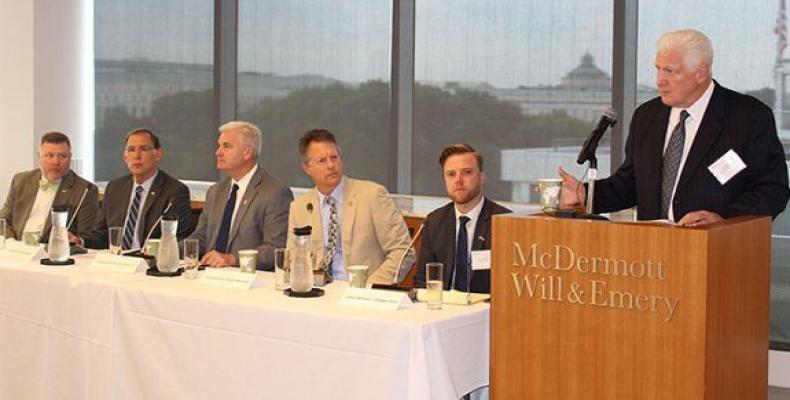 Washington, June 8 (RHC)-- Four Republican lawmakers stated in Washington that greater agricultural trade between Cuba and the United States would be mutually beneficial and urged for the easing of the trade restrictions that currently hamper bilateral trade.

Representative Rick Crawford has introduced legislation to ease trade restrictions with Cuba and observers say it could pass the House of Representatives if lawmakers were allowed to vote on it.

Known as the Cuba Agricultural Exports Act, H.R. 525 would allow farmers to extend credit to customers in the island.

Representative Emmer said that there is great bipartisan support for the bill.

“There's a majority of the people that actually favor changing this policy. Unfortunately, a very small group within Congress still has the loudest voice. We're trying to change that," Emmer said.

The bill is opposed by members of Florida´s congressional delegation.

The panelists in the roundtable considered that the other 49 states of the Union ought to have a voice on this issue as well.

Referring to the US economic blockade on Cuba, representative Marshall said that It is time to set politics aside and to do the right thing, and argued that eliminating trade barriers benefits everybody.

Jose Ramon Cabanas, Cuba's ambassador to the United States, was on hand for Thursday's event.

The diplomat highlighted the significance of talking with people who really know the reality of the island,  who do not talk about it from a distance, as the legislators participating in the panel have visited Cuba on several occasions.

Cabañas said they have worked hard to strengthen agricultural relations between the two countries, and noted that farmers do not speak English or Spanish, but the common language of how to produce or trade.

He said Cuba  would welcome increased trade with Arkansas.