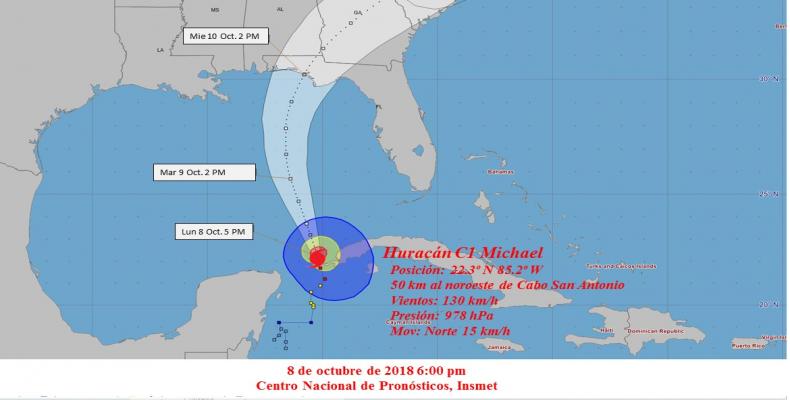 Havana, October 9 (RHC)-- The path of Hurricane Michael over western Cuba has left destruction and service disruption in the region, with Pinar del Rio, the western-most territory, suffering road blocks, coastal flooding and a power outage over 90 percent of the province.

Also hard hit was the special municipality of Isla de la Juventud, in the south.

The National Civil Defense said the hurricane unleashed heavy rains and winds, causing floods and surges in both territories.

The storm left some 200 millimeters of accumulated water in areas like Isabel Rubio, in the southwest, the cities of Pinar del Rio and San Juan y Martinez, and at Cabo San Antonio, at the tip of the island.

Four high-voltage power lines are reported down, with 90 percent of users in Pinar del Río and 70 in Isla de la Juventud going without electricity.

Additional damage has been reported in fishing infrastructure, including boats.  And passenger transportation in those territories has been suspended.

Hurricane Michael is now moving north and away from Cuba, and it is expected to gain in organization and intensity as it enters the Gulf of Mexico.  The National Hurricane Center in the U.S. is estimating the hurricane making landfall in Florida as a Category 3 storm on Wednesday, somewhere between Destin and Apalachee Bay.