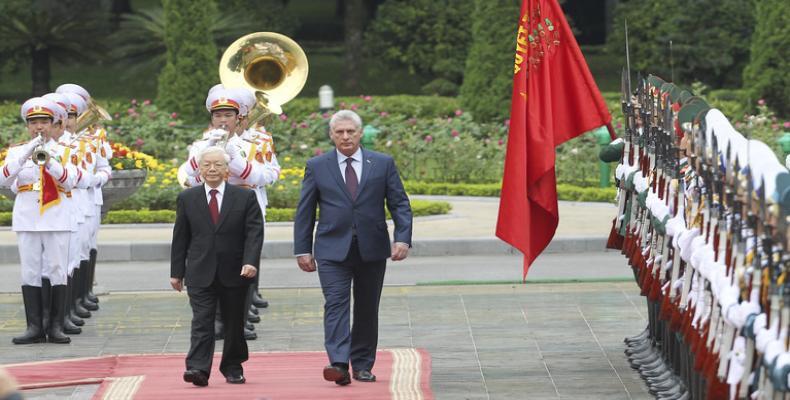 Hanoi, November 9 (RHC)—The leaders of Cuba and Vietnam on Friday pledged to deepen relations between their two countries.

Cuban President Miguel Diaz-Canel and his Vietnamese counterpart President Nguyen Phu Trong witnessed the signing of trade and finance agreements after official talks in the Vietnamese capital.   Before the talks, the Cuban president was awarded the Ho Chi Minh order, the highest distinction of the Asian country.

Speaking at a joint news conference, Trong, who is also the general secretary of the Communist Party, said “Vietnam and Cuba will continue close and comprehensive cooperation … and deepen exemplary fraternal relations.”   Trong said he and the Cuban president discussed measures to deepen ties in defense, security and diplomacy and enhance cooperation in agriculture, biotechnology, the pharmaceutical sector, medicine, education, science and people-to-people exchanges.

Diaz-Canel said all Cubans have great admiration for Vietnam’s struggles and that his and Trong’s visit to Cuba in March will contribute to strengthening the countries’ relations.   “We also expressed our desire to continue to share experiences of building socialism in each country,” Diaz-Canel said.

He thanked Vietnam for its support in efforts to lift the U.S economic blockade on the island country.

The Cuban president is on a three-day visit to Vietnam as part of his first international tour since taking office in April.  He has already visited Russia, North Korea and China and will visit Laos after Vietnam.