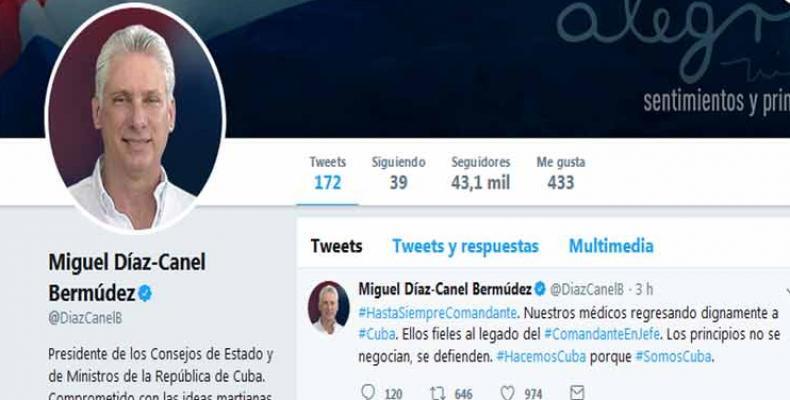 In a message, on the occasion of a world campaign on twitter in Fidel's homage, Díaz-Canel wrote: "Our doctors, followers of the legacy of our Commander in chief, are coming back to Cuba.  Principles are non-negotiable.  Instead, they are defended."

Friday's social media campaign – also known as a Twitter Storm – was organized by the Havana-based Institute of Friendship with the peoples (ICAP), just a little more than a week from the second anniversary of Fidel's death on November 25th.

The twitter storm campaign also took place in the context of the decision announced Wednesday by the Cuban Health Ministry that the country will end its participation in the ‘More Doctors for Brazil’ Program, following totally disrespectful references to the country’s doctors and health personnel participating in the landmark program by Brazilian president-elect Jair Bolsonaro, who even questioned their qualifications as medical professionals.

About the Cuban decision to end its participation in the program, Cuban deputy Estela Cristina Luna said it was necessary and a matter of principle.  “The decision adopted by the Cuban government deserves our full support.  Our doctors will return home with their heads held high after fulfilling a humanistic mission in the poorest communities across Brazil,” said Luna, a practitioner who chairs the parliamentary commission on health and sports, and served also as head of the Cuban medical mission in Brazil from 2013 when the ‘More Doctors’ Program was launched up until February this year.