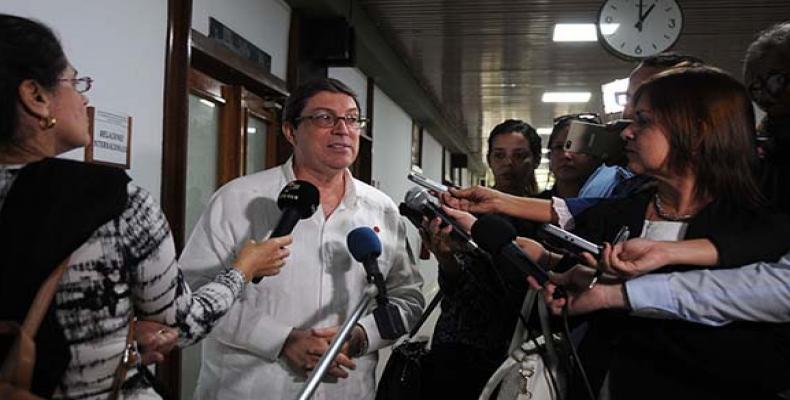 Havana, December 18 (RHC)-- Cuba says that after four years of the announcement of the resumption of diplomatic relations with the United States, its economic siege on the island has been strengthened and Washington has increased its hostility against the Caribbean nation.

In statements to the press during a break of debates of the permanent commissions of the Parliament currently underway in Havana, Cuban Foreign Minister Bruno Rodriguez recalled that some progress was made in the ties between the two countries up to 2017.

“Some travel restrictions for U.S. citizens were partially lifted, and the Obama administration described the blockade as an obsolete and ineffective policy, although it was not substantially modified,” he added.

The top Cuban diplomat noted, however, that the Trump White House reversed the measures that favored U.S. citizens travelling to the island and has reinforced the blockade, caving in to ruling circles that favor a greater degree of confrontation between the two countries.

The foreign minister stressed that Cuba has always been willing to talk with the United States, but on the basis of absolute respect for the island's self-determination and sovereignty.  “We will never hesitate to claim our rights and denounce their aggressive actions,” said Bruno Rodriguez.

Cuba and the United States announced the restoration of their relations on December 17, 2014, with Barack Obama in the White House and Raúl Castro in the presidency of the island, the reopening of mutual embassies took place in 2015.

The resumption of direct commercial flights and the signing of agreements in areas such as security, migration, education, health and culture ensued.

But the arrival of Donald Trump to the presidency in 2017 stopped the normalization of bilateral relations and has partially reversed the thaw in Cuban relations initiated by his predecessor by restricting the travel of Americans to Cuba and the imposition of obstacles to business with the island.