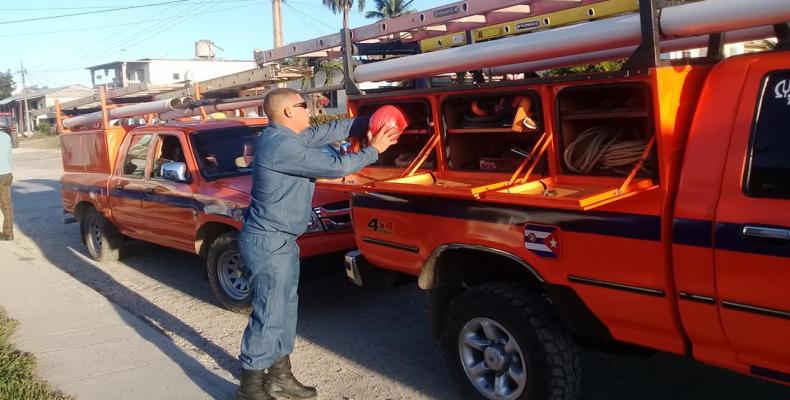 Havana, January 29 (RHC)--  Cuban President Miguel Diaz-Canel led a new meeting of the Council of Ministers Monday evening to assess the progress of relief efforts undertaken in the aftermath of the rare and destructive tornado that affected several municipalities of the capital on Sunday night.

"Paying utmost attention to the population at times like this is vital," Diaz-Canel said. "Work has been done quickly from the very beginning and it is necessary to explain to the people everything that is being done."

Speaking to ministers, civil defense and local authorities, the Cuban president stressed how weather patterns are no longer predictable and he said that from now on this reality must be taken into consideration in disaster management and prevention.

The chief of the National Civil Defense Staff, Major General Ramón Pardo Guerra, pointed out that according to an aerial exploration carried out on Monday morning, "the tornado originated in the Casino Deportivo neighborhood and weakened in the eastern district of Alamar."

"It is estimated that it covered a length of 11.5 kilometers, at a speed of 42, 6 kilometers per hour in 16 minutes; it began with an action diameter of 500 meters and then expanded to a thousand at the end of its trajectory," Pardo said.

According to the Civil Defense top official, "significant damage is being reported, including total and partial collapse of houses, fall of trees, electricity poles, and telephone lines, as well as containers, light and heavy vehicles dragged and overturned by strong winds. The city's sanitation and trash collection work is being carried out as quickly as possible."

The number of deaths as a result of the storm has risen to four, and a total of 195 people were injured and are being treated in different hospitals in the capital, Public Health Minister José Angel Portal Miranda told participants in the meeting.

The most severe damage is concentrated in the municipalities of Diez de Octubre, Regla, Guanabacoa and San Miguel, in 11 health institutions.

President Diaz-Canel indicated that once the losses are thoroughly assessed, the necessary assistance should begin to be distributed immediately to those in need.

Regarding electrical service, the Minister of Energy and Mines, Raúl García Barreiro, assured that electricity is expected to be fully restored by Thursday.