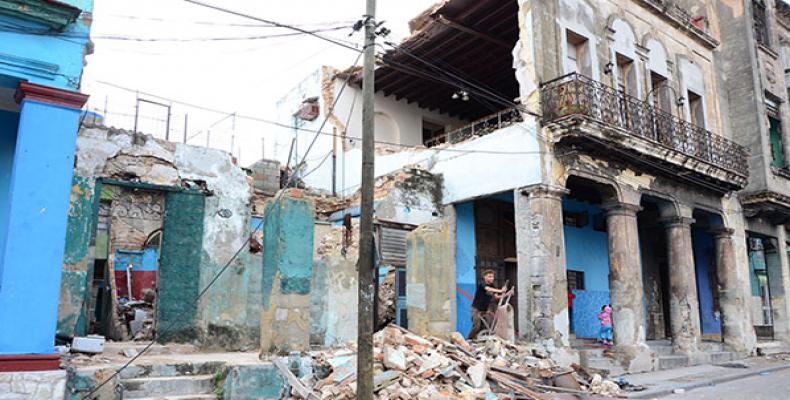 Havana, February 1 (RHC)-- On Thursday, shortly after concluding a tour of different Havana municipalities affected by the powerful tornado last weekend, Cuban President Miguel Diaz-Canel presided over a meeting of the Council of Ministers.   Meetings have been held daily since Monday to assess the process of recovery in Havana.

Díaz-Canel highlighted the qualities of our people and recognized recovery efforts underway in the streets. "We must continue  informing the public," he said.  "The procedure that must be followed by those who wish to make donations must be carefully explained to avoid confusion."

Likewise, he called attention to the need to convert abandoned buildings into homes and thus speed up the restitution of damaged homes.  "The offices for the acquisition of construction materials," he said, "must be prepared so that, without violating any procedures, work can be carried out with promptness that is required."

René Mesa Villafaña, Minister of Construction, said that so far there are 2,699 affected houses, of which 342 are completely destroyed.  He stressed that the specialists of the Ministry have joined students of Architecture in the process of assessing damage to real estate, and that is an important support.  He confirmed that 19 points of sale of construction materials were fully enabled, where items such as cement, sand and construction blocks are available.

The Minister of Construction also reported that these tasks are being aided by brigades made up of workers from different agencies and entities, as well as by young people from the Federation of Students of Secondary Education and the University Student Federation.

Raúl García Barreiro, Minister of Energy and Mines, confirmed that this Thursday the electric service in the municipality of Guanabacoa was almost restored; in the case of Regla y Diez de Octubre, he reported that more than 70% of customers already had electrical power, which would be restored in its entirety on Friday.

The Minister of Public Health, José Ángel Portal Miranda, said that the epidemiological situation is under control and vector control measures in the affected areas have been put into practice.

In general, progress is being made in the recovery of telephone services and water supply remains stable, including distribution with water trucks.  The educational process remains unchanged, and homes where children remain without being able to attending classes are being visited.

Based on reports and assessments presented by other ministers, such as Economy and Planning, Finance and Prices, Domestic Trade, Agriculture and Food Industry, it is possible to confirm that the recovery in Havana is progressing.