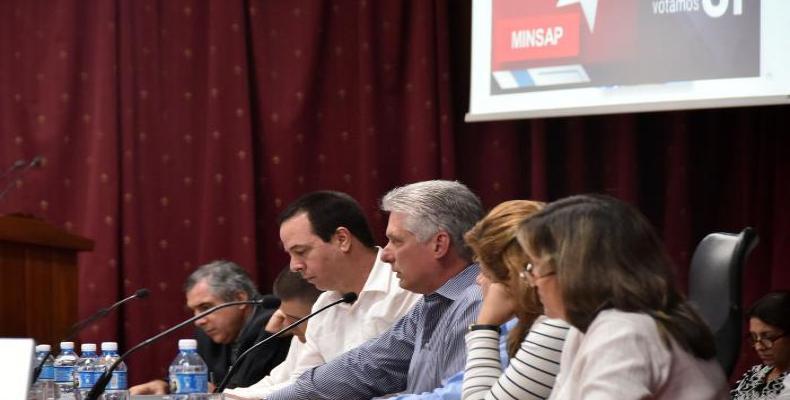 Oscar Silvera Martínez Justice Minister noted that last year saw improvements in the quality of services, application of the law and efficiency.  Among priorities for 2019, he mentioned strengthening links with the population, continuing to improve services and working conditions, as well as supporting foreign investment and digitalizing public registries, among other tasks.

Diaz-Canel called to work with efficiency, highlighting the importance of training for professionals and cadres toward solving problems.  He warned against stifling bureaucracy which, he noted, leads to unnecessary obstacles and delays in the implementation of certain policies.

Regarding the results of the public health sector in 2018, Minister José Ángel Portal noted that sector continued to work to improve the health of the population, services and efficiency.

Among notable achievements, Portal mentioned the island’s infant mortality rate - the lowest in the country’s history for a second year running, at four for every 1,000 live births - 98% vaccination coverage, and commendable HIV/AIDS prevention work.  He also highlighted improvements across health facilities, with key investments in infrastructure.

However, 2018 also saw shortages of medications, something that the ministry is working to resolve in collaboration with BioCubaFarma, by defining purchase, production and distribution priorities.

Meanwhile, Diaz Canel called to work in a timely manner to fix problems, with energy, quality and efficiency.