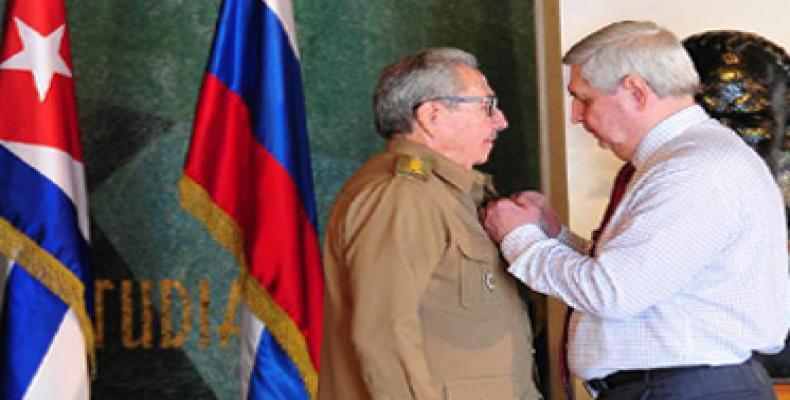 During a ceremony held at the Jose Marti Memorial at Revolution Square, right after the massive parade of Cuban workers on May Day, Raul received the recognition from Ivan Melnikov, first vice-president of the State Duma and the Communist Party of the Russian Federation.

Melnikov described Raul Castro´s exceptional contribution to the building of socialism and his work to consolidate the principles of justice, humanism and social progress.

The Communist Party leader said he did not receive the Lenin prize for himself, but on behalf of all the Cuban people, of all members of the Communist Party and as a recognition of the leadership of the Party.

He pointed out that the Lenin Prize is irrefutable proof of the historic relations between both peoples that have survived different scenarios and that today are reinforced and renewed even more.

Raul reiterated that Cuba will never forget the gratitude that the Cuban revolutionaries owe to the Soviet Union and, especially, to the heroic Russian people.  In this regard, he recalled the words that Fidel once said: "Without the help we received from the Soviet Union, it would have been difficult, however heroic the resistance of our people, to have been victorious in all those difficult years."

The award ceremony was attended by Cuban President Miguel Diaz-Canel and other members of the Political Bureau of the Communist Party of Cuba.

The Lenin Prize, created in 1925, was one of the most important distinctions of the former Soviet Union.