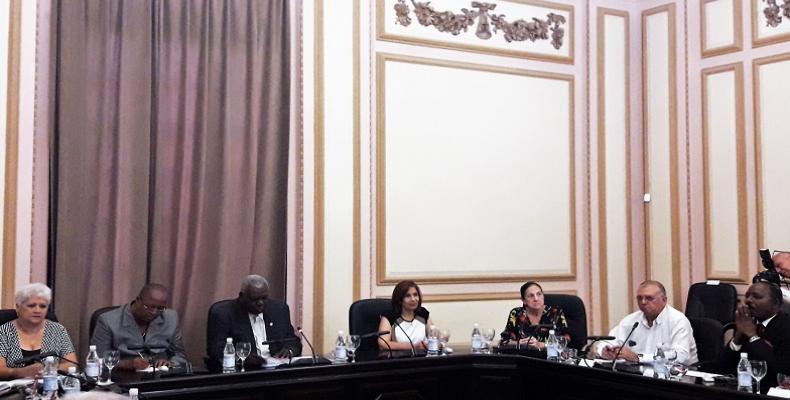 Havana, May 21 (RHC)-- African ambassadors accredited in Cuba met with the speaker of the island´s Parliament, Esteban Lazo Hernandez on the occasion of Africa Day.

Speaking with the diplomats, Lazo Hernandez said that there has not been a single just cause in Africa that has not had the support of the Cuban people.

The head of the African Union diplomatic corps accredited in Cuba, Guinea Bissau´s Ambassador Abel Coelho de Mendoza, said that the past and future of Africa and Cuba are intertwined.

“The history of Africa was written with blood from our Cuban brothers and sisters.  Cuba is part of the development of Africa,” Coelho said.

The diplomat reiterated the African Union solidarity with Cuba and its rejection of the US economic blockade.
It is estimated that at present some 4000 Cubans are working in 28 nations of Sub Saharan Africa, and over 30000 students from African nations have graduated in Cuban universities.

Africa Day is celebrated every May 25th.  It marks the foundation of the Organization of African Unity (OAU) on that date of 1963.