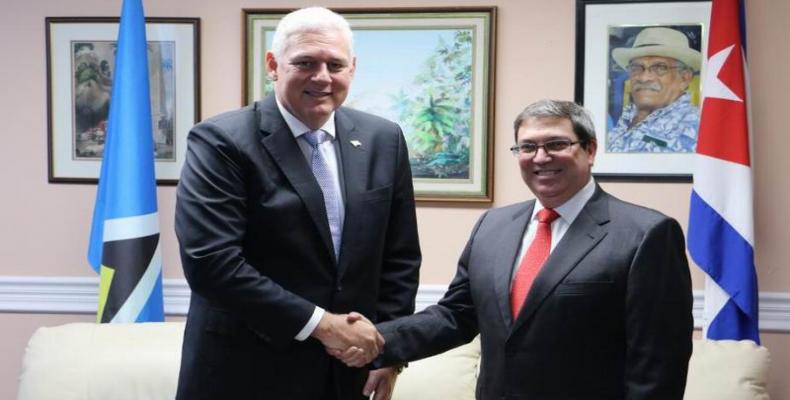 Castries, June 13 (RHC)-- The Prime Minister of St. Lucia, Allen Chastanet, received the Cuban Foreign Minister, Bruno Rodríguez, on Wednesday. During the encounter, both exchanged about the good status of bilateral relations, which will mark their 40th anniversary this year.

' We exchanged about the positive bilateral relations and ratified the common will to strengthen the bonds between our countries” 'the minister wrote on Twitter.

Rodriguez also met with Sir Emmanuel Neville, Saint Lucia’s Governor General, to whom he ratified Cuba´s willingness to follow up on and strengthen the existing cooperation ties, particularly in projects linked to healthcare and the training of professionals.

The top Cuban diplomat also visited the ophthalmology center of the Victoria Hospital, and met with Cuban professionals working in the small Caribbean island.

Prior to St. Lucia, the foreign minister visited Trinidad and Tobago.  His Caribbean tour will continue in Guyana and Barbados and will conclude on June 18th.