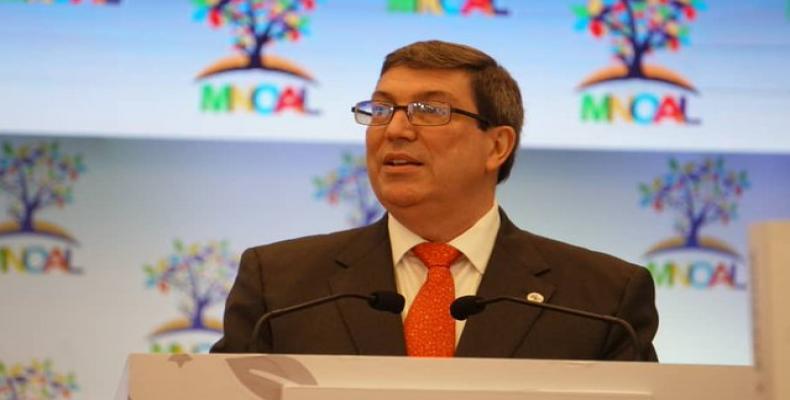 At the Ministerial Meeting of NAM's Coordinating Bureau, held in Caracas Saturday, the foreign minister condemned the imposition of sanctions against sovereign countries, while reaffirming Cuba's support for peoples currently under attack by foreign powers.

"Sanctions and attacks against countries are part of the measures that significantly harm the stability of peoples," Rodríguez said.

The head of Cuban diplomacy noted that the recognition by the U.S. government of Jerusalem as the capital of Israel and the Syrian Golan as part of the territory of that country,as well as the withdrawal of the nuclear agreement treaty, sanctions and the constant military threat against Iran intensify the conflict in the Middle East,

He also condemned the intensification of the economic, commercial and financial blockade against Cuba, which he described as  an attack on International Law and on the sovereignty and self-determination of all States,

On behalf of his government Rodriguez reiterated its firm support for the Venezuelan people and the Venezuelan Executive, and stressed that the civil-military union is the way to consolidate the social stability of the South American country.

In concluding his remarks, Rodríguez reaffirmed the Caribbean island's commitment to multilateralism, "for a world of peace and sustainable development, which will be possible with the efforts of all nations," he said.

In the last segment of NAM's Coordinating Bureau ministerial meeting, the foreign ministers will evaluate the agreements to be signed subsequently by the heads of state next October, the date on which Venezuela will hand over NAM's presidency to Azerbaijan.