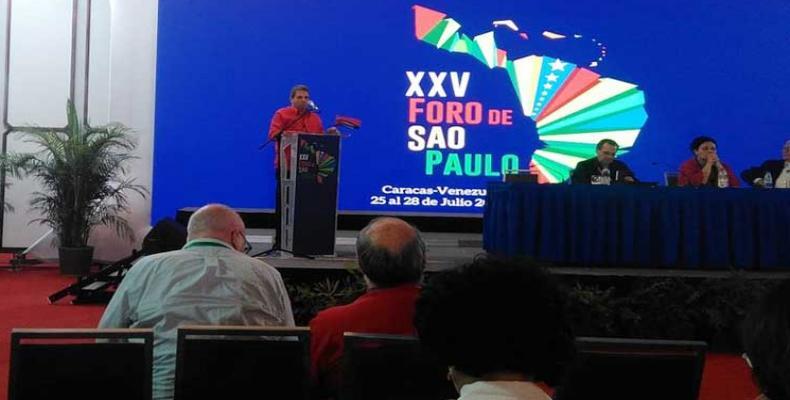 Havana, July 27 (RHC)--- Cuba has invited participants at the 25th Sao Paulo Forum, currently meeting in Caracas, Venezuela, to be present at the Meeting of Anti-imperialist Solidarity for Democracy and against Neoliberalism, which will take place in Havana from November 1st to the 3rd.

Víctor Gaute, member of the Secretariat of the Central Committee of the Communist Party of Cuba and head of the Cuban delegation, extended the invitation on Friday for an event whose motto is "The people are still in struggle."

The call issued for the Havana event says that its celebration expresses the decision of the Cuban Revolution to respond to the demand of the political left, the social left and the movement of solidarity with Cuba, and to show that the Caribbean nation continues to be a common rendezvous point for the struggles of the peoples on the continent.

The objective of the event is linked to those of the Sao Paulo forum, a platform for concertation of the left, because it hopes to contribute in a real way to the confrontation with the current offensive of U.S. imperialism and to the search for the broadest unity of the left forces in the region, and also to strengthen militant society in the just causes defended by the peoples.

Under the slogan For Peace, Sovereignty and Prosperity of the Peoples, the Sao Paulo Forum meeting in Caracas will conclude on Sunday, July 28.  It is being attended by representatives of more than 100 social movements and left-wing political parties from around the world.

The meeting debates and reflects on the advance of neoliberalism and imperialism over the progressive countries of the region, which causes an increase in poverty, threats to democracy and peace, attempts at economic, political, social and even military interference in Latin America and the Caribbean.