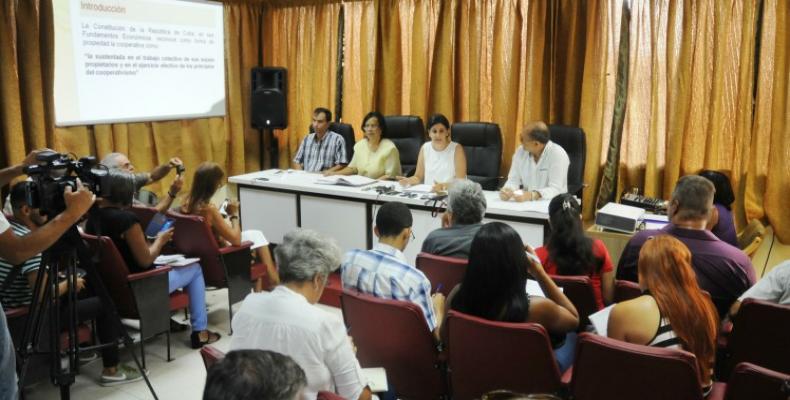 Havana, August 30 (RHC)/-- Cuba’s business system and economic mechanism are undergoing changes with the publication in the Official Gazette of new regulations for Non-Agricultural Cooperatives.

Two decree laws and two norms published Friday on an ordinary issue of the island’s official journal provide the rules and norms that will guide a process which is still experimental.

Addressing the press in Havana, Yovana Vega, member of the Permanent Commission for the Development and Improvement of Non-Agricultural Cooperatives said that the new regulations seek to further develop and improving the operations of existing non-agricultural cooperatives.

She pointed out that they seek to ratify the validity of the experimental process in accordance with the conceptualization of the Cuban Economic and Social Model of Socialist Development.

She said that the new decrees and norms seek to regulate the errors observed in this process and to regulate some essential elements to promote such a productive form.

The operation of these cooperatives began in 2013 with the creation of the first 126 of them, and has a gradual ascending development, the expert noted.

At the end of May 2019, there were 398 non-agricultural cooperatives island-wide with 18,000 members, operating in 10 sectors or activities.

Vega noted that after evaluating the first years of their operation, positive and negatives aspects in their management were identified

Some of the negatives patterns identified were deviations from their main purpose, associated fundamentally to indiscipline and violations of legality.

The official said that for this reason, it was determined that at this experimental stage, no new cooperatives will be created, and that priority will be given to efforts to consolidate the functioning of existing cooperatives.

In this respect, measures will be applied for their improvement as economic actors that must operate under equal conditions with the rest of the figures of the business sector.

They should also have a greater impact on the activities they carry out on a territorial scale.

In addition, the control mechanisms and monitoring required for their proper functioning will be strengthened.