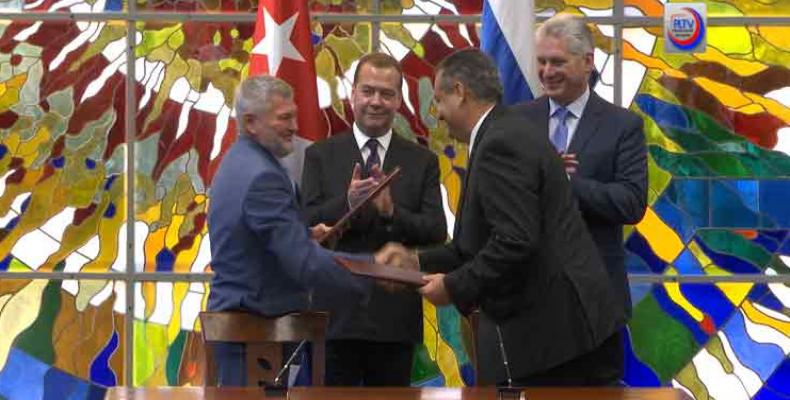 Havana, October 3 (RHC)-- Cuba and Russia signed eight cooperation agreements on Thursday, including financing for the assembly of motor vehicles on the Caribbean island.

The signing of the agreements took place in the Palace of the Revolution in the presence of Cuban President Miguel Diaz-Canel and Russian Prime Minister Dimitri Medvedev.

The accords include an agreement on scientific-technical and innovative cooperation, and another on a protocol for the customs of the two countries to participate in the fight against air traffic violations.

Another pact includes the financing of projects to maintain the airworthiness of Russian aircraft operated by Corporación de Aviación Cubana S.A. (Cuban Aviation Corporation) Another agreement signed was on the financing of the supply of rolling mill for the production of steel and wire armor.

They also agreed to execute a project for the creation of an irradiation center in Cuba.

Havana and Moscow signed a protocol of intent  between the Russian Railway Company and the Cuban Railway Union.

Also in the area of transportation, they signed a contract for the rehabilitation and modernization of the railway infrastructure of the island.