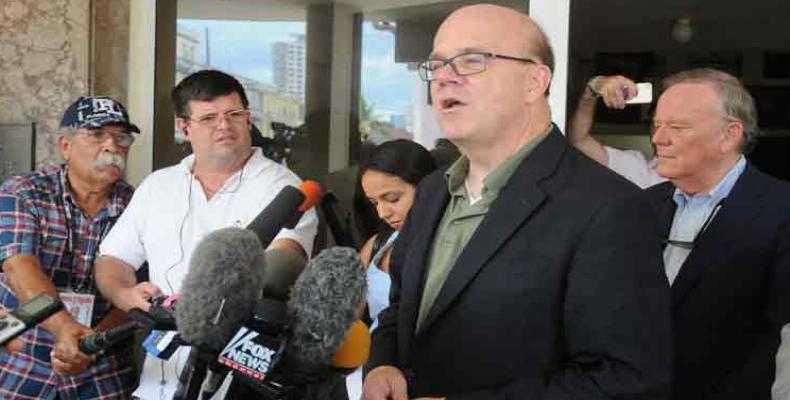 Havana, October 3 (RHC-- U.S. Democratic Congressman James McGovern said Thursday  that his country's policies toward Cuba are wrong, meaningless and that the people of the island do not deserve to suffer for this.

The  chairman of the House of Representatives  Rules Committee, McGovern is part of a large delegation of personalities, businessmen, legislators, among others, visiting Havana.

“We have come to extend the hand of solidarity to Cuba, to build bridges,' the Massachusetts state representative told reporters after an encounter with students from the Raúl Roa García Higher Institute of International Relations.

The congressman said that the member of his delegations oppose the current US Cuba policies.

“We want to lift the blockade, end travel bans and restore the normal functioning of the embassies, and make visa applications less cumbersome,” McGovern said.

Considered one of the most liberal members at the US Capitol, McGovern, has been visiting the Caribbean nation since 1979, and has also been one of the most active advocates of restoring diplomatic ties between Cuba and the United States.

In his statements to the press,  he considered that even with the current travel bans, 'more of our citizens and politicians should come, they should know and know how great Cuba is and how welcome they will feel.”

Stressing the inadmissibility of the punishment of the Cuban people and their suffering because of Washington's policies, he commented that as faithful 'Americans we value freedom, but our government should honor that.

McGovern, co-sponsor of several bills in favor of lifting the blockade, insisted that his next steps will be to continue advocating an end to the economic, financial and commercial siege that for nearly 60 years has been imposed by successive White House administrations, both Democrats and Republicans.

At the same time, he called for the elimination of the Helms-Burton Act, which since its approval in 1996 has reinforced the extraterritorial nature of the blockade.

In April, McGovern was in Havana as part of an important collaboration project linked to the work of Ernest Hemingway and Finca Vigía, the home of the famed American writer from 1940 until his death in 1961.