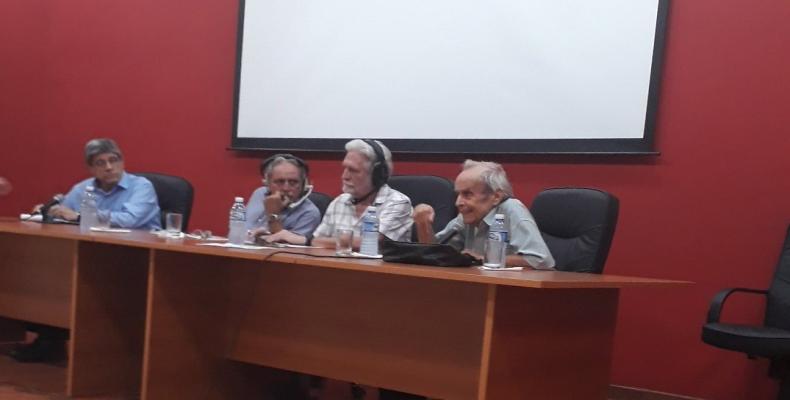 Havana, October 29 (RHC)—Cuban diplomats, intellectuals and representatives of the Academia said Tuesday that no matter how hard the Trump Administration tries to punish Cuba further, it will not succeed since the island will never concede or betray its solidarity with other countries.

They were guests of a special broadcast of Radio Havana Cuba's English language service that aired Tuesday from the Raul Roa Higher Institute of International Relations (ISRI) in Havana.

During the program, they expressed their confidence that the international community will overwhelmingly approve the resolution on the need for the end of the U.S. blockade at the U.N. General Assembly to be voted next week.

Responding to students' questions, Carlos Fernandez de Cossío, Director General for U.S. Affairs at the Island's Foreign Ministry said that by punishing Cuba, the Trump administration believes it is acting on behalf of the American people, an action that he considered is a result of a "very politically manipulated approach in foreign policy."

He added that the current U.S. Administration has a massive misunderstanding of the people of Cuba and its history and a lack of consideration of historical records.

Former Cuban Five and National Hero, economist Ramon Labañino, noted that the U.S. blockade costs more than 4,3 billion dollars a year, at a tune of 12 million dollars per day. He wondered how much Cuba could do for its social programs with that money.   In further explaining the impact of the latest measures against the island, he said that the banning of U.S. commercial flights to all Cuban destinations except Havana would mean a decrease of 43% of visitors to Cuba.

Asked about any prospects of normalization of relations between Cuba and the United States, National Hero and former Cuban Five Gerardo Hernandez, stated that according to polls, people in Cuba and the U.S. consider that the two countries should have normal relations.

He also took the opportunity to convey his deep appreciation on behalf of the Cuban Five to Ricardo Alarcon, Radio Havana Cuba, and all of its listeners who were involved in the fight for the release of Cuban Five from U.S. prisons.