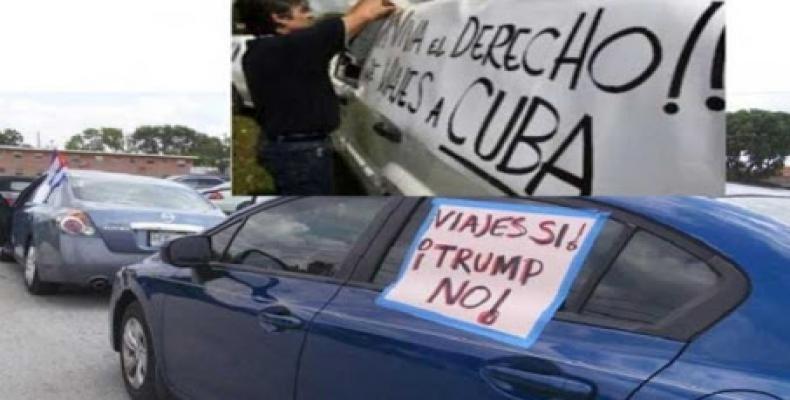 Washington, February 8 (RHC)-- Cuban immigrant organizations based in Miami are joining this Saturday in a caravan called by the Alianza Martiana to demand the right to travel to the island without restrictions.

The Cuban American Defense League,  the Cuban Americans for Engagement (CAFE), Cuban Bridges, and the Foundation for the Normalization of the Relations between the United States and Cuba (FORNORM )are some of the organizations participating.

Elena Freyre, president of FORNORM, told the press that it is necessary to raise their voices against any injustice, and that is why many people who want good relations between the two countries are participating in the caravan.

The initiative is supported by members of the Cuban Diaspora who on previous occasions, have similarly rejected the economic, commercial and financial blockade imposed by the U.S. government on Cuba for almost 60 years.

The caravan's journey begins one hour before noon from 12th Street between 95th and 97th Avenues in southwest Miami.

The Alianza Martiana condemned last January 11, the suspension of public charter flights to destinations on the island, except to Havana, effective March 10.

For the coalition, this measure announced on January 10 by Secretary of State Mike Pompeo, is criminal.

According to Pompeo, Washington will also impose limits on the number of such flights that can arrive at the José Martí International Airport in the Cuban capital.

The Trump administration, determined to destroy the Cuban Revolution, suspended on December 10, all regular travel by U.S. commercial airlines to sites on the island outside Havana.

That decision also provoked much criticism because of the effects on families in both countries.