Foreign Relations had significant results in Cuba in 2019 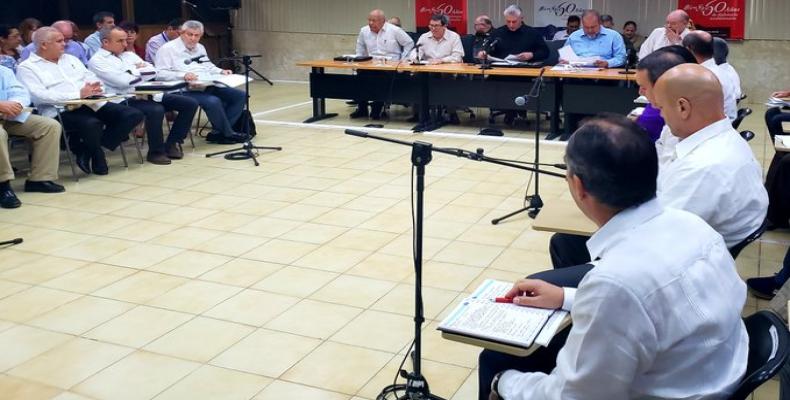 Havana, February 20 (RHC)-- Cuban President Miguel Díaz-Canel participated on Thursday in the annual review of the foreign policy work during 2019 and the priorities for the island's Foreign Ministry for 2020.

Cuban Foreign Minister Bruno Rodríguez recalled that last year was complex, challenging, and with significant results for Cuba and its people.

Rodriguez pointed out that  2019 was a  year marked by the hostility of the U.S. government and a brutal tightening of the blockade and in which relations with the countries of the world were consolidated.

"The victory at the UN General Assembly with the passing of the Resolution calling for the end of the U.S. blockade was a resounding victory. And the votes of Brazil and Colombia, taking sides with the U.S. were very demoralizing for those countries," noted the President.

Cuban diplomats ratified their commitment to the Cuban people, party, and government. They declared themselves faithful to the legacy of the revolutionary diplomacy of Raul Roa, Che, Fidel, Raul, and Diaz-Canel.

The President stressed that the upcoming Conference the Nation and Emigration has to mark a milestone in the relations among Cubans, "bringing us closer and understanding each other, participating together in defense of the sovereignty, unity and working for the development of the country."

"Let's be more proactive in economic diplomacy. Let's not just limit ourselves to the big economies. Any niche is useful to break the siege," the President also said, when referring to the role Cuban diplomatic missions have to play amidst current times.

Diaz-Canel referred to the image of the island, which its adversaries try to discredit, attacking pillars such as medical services or citizen security.   "With those attacks, they try to undermine sources of income, such as collaboration in health and tourism."

He stressed that it is enough to show what we are: "A nation of friendship, solidarity and relations with all countries, even with the adversary, based on mutual respect."