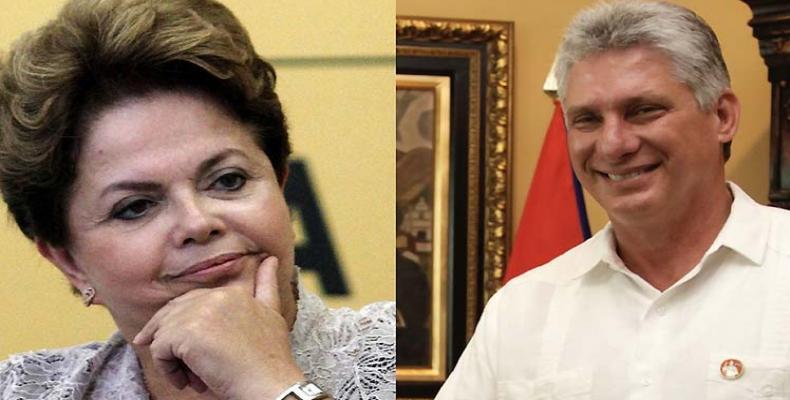 Brasilia, April 20 (RHC)-- Former Brazilian President Dilma Rousseff reaffirmed her repudiation of the U.S. blockade against Cuba in a letter she sent to Cuban President Miguel Diaz-Canel, which she made public on her Facebook account.

"On this date, I wish you a happy birthday, good health and many personal victories for the benefit of the Cuban people," the former president wrote on the digital platform, referring to Diaz-Canel's 60th birthday on Monday.

She said: "I take this opportunity to reaffirm my admiration and respect for your country and your people, as well as my firm protest against the blockade against Cuba, maintained by the United States, which is even more unacceptable at a time when the world is fighting a pandemic."

Dilma Rousseff once again expressed her thanks for "the solidarity of the more than 11,000 Cuban doctors who helped me carry out the Mais Médicos (More Doctors) program in Brazil, which offered medical care to more than 63 million Brazilians."

She denounced the fact that "the Cuban professionals had to leave my country due to the negligence and lack of respect of the government (of Jair Bolsonaro) that took over last year."  But it is certain, she emphasized, "that if they were still with us, Brazil would certainly be in a better position to face this difficult moment of great difficulty in the area of health' because of the SARS-CoV-2 virus."

Brazil registered 40,581 infected with COVID-19 and 2,845 deaths, adding up to 383 in the last 24 hours, according to the latest bulletin released on Monday by the Brazilian Ministry of Health.