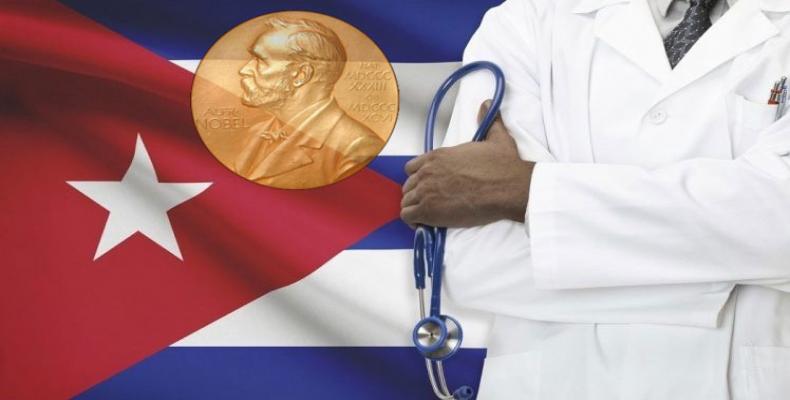 Washington, May 6 (RHC)-- The U.S. organization Codepink is calling to award the Nobel Peace Prize to Cuba's Henry Reeve International Medical Brigade, which is currently fighting the SARS-Cov-2 coronavirus in some 20 countries.

The feminist and pacifist group urged on its web page to support a request to the Nobel Peace Prize Committee to consider including the Caribbean country's physicians on this year's list of candidates, even though the deadline for nominations has passed.

Codepink says that there is still a chance to convince a committee member to add them to the list of nominees.  "If we gather enough support around the world, we believe we can do it."

"In the midst of this global pandemic unprecedented in modern history, there is one group from a small country that has provided hope and inspiration to people around the world: the Cuban doctors and nurses who are part of the Henry Reeve Brigade," Codepink said in the petition addressed to the awards panel.

The petition, which has already gathered over 2,600 virtual signatures of support on the first day -- after being published on the organization's website on Tuesday -- highlights that these health professionals are now working in 22 countries to fight COVID-19, a disease caused by the coronavirus.

"In recognition of their magnificent solidarity and selflessness in saving thousands of lives while putting their own at risk, we urge you to award them this year's Nobel Peace Prize," the text says.

The petition recalls that the brigade, officially the Henry Reeve International Contingent of Doctors Specialized in Disaster Situations and Serious Epidemics, is only one part of the Cuban medical system and has been on the front line providing help in emergency conditions.

Before COVID-19, the 7,400 volunteer health workers of that body had treated more than 3.5 million people in 21 countries devastated by the world's worst natural disasters and epidemics.  One of their most heroic acts, the call adds, was in 2014-2015, when the brigade sent more than 400 doctors, nurses and other health workers to West Africa to confront the dangerous Ebola pandemic.

The brigade is now working globally to combat the pandemic, the text of the cal adds, highlighting Cuba's presence in nations such as Italy, Jamaica, Belize, Mexico, Venezuela, Antigua and Barbuda, Andorra and South Africa.

"Although we are aware that the nomination period has passed, we ask the Nobel Committee to make an exception given the exceptional response of the Henry Reeve to the global emergency caused by the coronavirus," says Codepink's call.

According to the organization, the example of selflessness, courage and solidarity of these physicians in the midst of the pandemic is unparalleled and deserves the world's most prestigious peace prize.