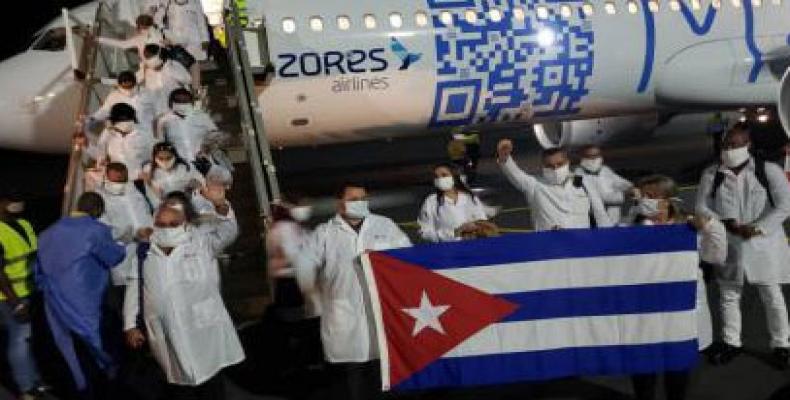 Havana, June 27 (RHC)-- The High Commissioner for the fight against COVID-19 in Guinea Bissau, Magda Robalo, together with the Cuban Ambassador in that nation, Raúl de la Peña Silva, received the Henry Reeve Brigade -- made up of 23 Cuban health professionals who will help the African country fight the pandemic caused by the new coronavirus.

A note published on the official MINREX website, sent from the Cuban embassy in that African country, highlights that the eight doctors, 10 nurses and intensive care nurses, two laboratory technicians, an electro-medical technician, a logistician and a team leader are part of the 36th Cuban internationalist brigade.

According to the Cuban ambassador, Raúl de la Peña Silva, the Cuban specialists will join the Cuban medical brigade deployed in Bissau, as part of the cooperation and "will form a great family" together with their Guinean colleagues to save lives, in that country where more than 1,600 Guineans have been infected, including 22 dead, since March.

The diplomat argued that the members of the team that arrived in Guinea-Bissau on Saturday have been carefully selected to work on the fight against COVID-19.  "They are here in the fulfillment of the sacred duty of saving lives in a poor country, but with a noble and grateful people," said Raúl de la Peña Silva.

The High Commissioner for the Fight against COVI-19 and also former Minister of Health of Guinea-Bissau, Magda Robalo, said that the arrival of the Cuban medical team is "another demonstration of the solidarity and cooperation that exists between Guinea-Bissau and Cuba, a relationship that has been going on for a long time.

"Cuba has always been on the side of Guinea-Bissau, from the period of the struggle for independence until today.  It is not surprising to send Cuban doctors to help Guinea-Bissau fight the COVID-19 pandemic," said Magda Robalo.

The Guinean official, who distributed bouquets of flowers to each of the 23 Cuban experts as soon as they stepped off the plane, praised Havana's cooperation at a time when, she said, the COVID-19 pandemic is spreading in the country.

Also present at the time of the arrival of the Cuban specialists was the World Health Organization representative, Jean-Marie Kipela, who considered that Guinea-Bissau "needs additional efforts", that is, specialists in the clinical area of managing this pandemic.

Kipela said he was convinced that the Cubans will help and improve the work done by the technicians from Guinea and other nationalities who are already fighting the disease, in a country where, he said, most of the infected people are asymptomatic.