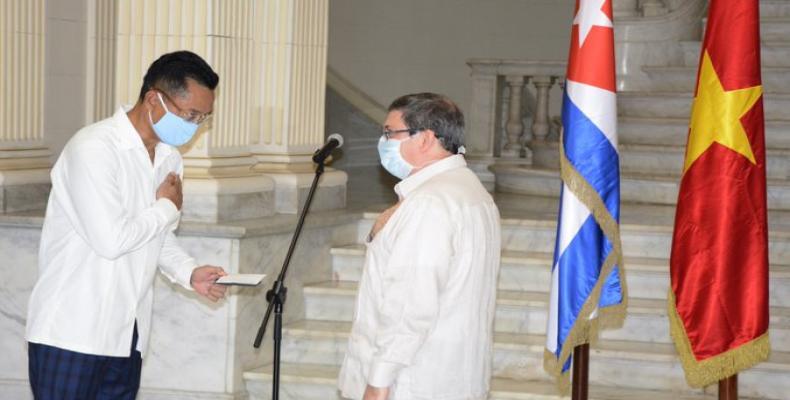 Havana, July 15 (RHC)-- The Council of State of the Republic of Cuba awarded the Medal of Friendship to Nguyen Trung Thanh, Vietnamese Ambassador to the Caribbean island.

Bruno Rodríguez, Minister of Foreign Affairs, reported on his Twitter account that the event reinforces the unbreakable bonds of friendship between the two nations, fostered since December 1960 and based on trade, investment, culture and defense, among other aspects.

"The Council of State confers the Medal of Friendship to the Ambassador of the Socialist Republic of #Vietnam in #Cuba Nguyen Trung Thanh.  We recognize his diplomatic work in the interest of strengthening the excellent ties between our peoples, parties and governments," Bruno Rodríguez declared in a tweet.

At the ceremony, Ambassador Thanh referred to Cuba's unquestionable handling of the health crisis and its efforts to contribute with other nations, despite the tightening of the U.S. blockade.

The note highlights that on the Cuban side, Anayansi Rodriguez Camejo, Deputy Minister of Foreign Affairs, pointed out the professionalism of the diplomat and the boost that bilateral relations have received during his term as ambassador.

This high distinction, imposed at the headquarters of the Ministry of Foreign Affairs, is granted at the proposal of the Cuban Institute of Friendship with the Peoples in recognition of a trajectory of solidarity with Cuba and defense of its Revolution.